The Court's Decision Will Affect Everyone - Even The Rich 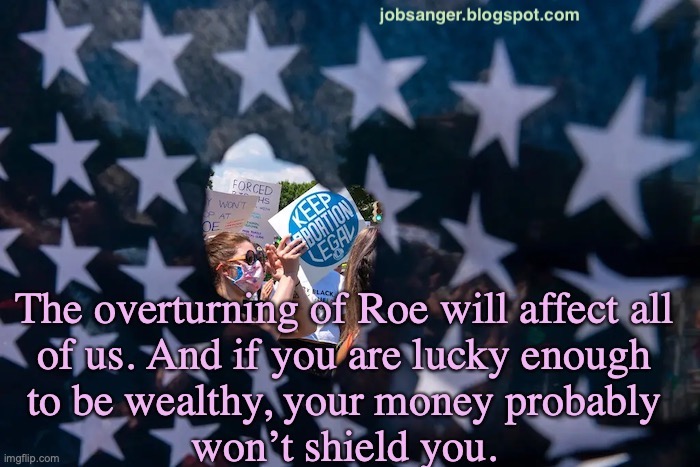 This thought-provoking op-ed in The New York Times is by Elizabeth Spiers:

If there’s one assumption about abortion rights that’s accepted across the ideological spectrum, it’s this: The Supreme Court’s reversal of Roe v. Wade will mostly affect the poor; rich women will still be able to access abortions when they need them.

Liberals make this point to highlight the fact that abortion is yet another locus for rising inequality. “If an extremist Supreme Court overturns Roe, wealthy women will still get safe abortions — by traveling to another state or country,” Senator Elizabeth Warren tweeted in May. “But women of color, those with lower-incomes, and victims of abuse will suffer the most.”

On the right, Supreme Court Justice Brett Kavanaugh and others argue that people who really need an abortion can simply cross state lines to get one — suggesting that pro-choice constituencies are overreacting.

The notion that rich women will be fine, regardless of what the law says, is probably comforting to some. But it is simply not true.

Yes, abortion bans will disproportionately affect poor women and women of color in a country that already has appallingly high maternal mortality rates, no federal paid family leave and little support for parents who struggle to provide for their children financially. As Rebecca Traister pointed out in New York Magazine, this is nothing new: The Hyde Amendment and state restrictions have already made abortion effectively inaccessible to many women without means or mobility.

But we should not lose sight of the reality that the Supreme Court decision has created a crisis for all American women. Even the richest Americans — the one-percenters and the upper middle class — will not escape the effects.

Attenuating the rights of half of the population will have systemic effects akin to climate change. Just as no amount of investment in Mars-bound space colonization, air-conditioned bunkers and private firefighting services will save the rich from terrible outcomes if the planet becomes uninhabitable, the rich cannot avoid the effects of the overturning of Roe. Residents of blue states won’t be exempt. And men who think the ban won’t affect them are mistaken; it will affect women they know and love, and it will change the political economy in which they live and operate.

The persistent myth that the wealthy will be unaffected is predicated upon the vague notion that they’ll be able to access and purchase abortion pills by mail, travel to places where abortion is legal or get an abortion from a local provider willing to break the law.

And sure, it’s easy to imagine a scenario where a red state one-percenter has his daughter or wife airlifted to another state for an abortion — or, potentially, for in vitro fertilization, if it becomes illegal to terminate embryos. We are accustomed to different rules and privileges for the wealthy, and witness these injustices daily. People with more money and privilege conferred by race and class — people who have access to better lawyers — experience our justice system differently. They also get better health care and pay less in taxes as a share of income. We hold the rich to a lower, not higher, standard and tacitly accept that they will get away with cheating various systems.

But the wealthiest are in for some unpleasant surprises when it comes to abortion. The scenarios where a woman needs an abortion include medical emergencies where any delay in treatment can have severe, even fatal consequences — and in those circumstances abortion pills obtained by mail won’t help. One in 50 pregnancies in the United States are ectopic pregnancies, for example, where a fertilized egg implants outside the uterus. The embryo must be removed, and delaying that treatment can result in sepsis, internal bleeding and death. Placental abruptions must be addressed immediately to avoid extensive bleeding, renal failure and even, in some instances, death. Any woman who finds herself in either of these scenarios is not going to be able to pack her bags and go for a long drive. Even for someone with the means, an airlift to a medical facility in another state may not be quick enough to save her. She will need to be treated locally and immediately. Some of the bans going into effect around the country include medical exceptions for these situations, but if there’s any ambiguity about what the law allows, the time it takes a medical professional to consult a lawyer may be the difference between life and death.

Some states are expected to try to ban interstate travel for abortions. Bans in Texas and Oklahoma leave room for that possibility. Planned Parenthood’s Montana branch has reportedly decided that it will no longer provide medication abortions for patients from certain states where bans are in effect or in the works, citing the “rapidly changing” legal landscape. It’s also clear that many Republicans view the Roe reversal as an inroad to a total federal ban. If they gain electoral victories in 2024, this is a very likely outcome, and in that case there will be no blue state abortion clinics to travel to. Even now, the lines and waiting times at abortion clinics in safe haven states are likely to get very long.

Many people also assume the wealthy can always find a local doctor willing to perform an abortion, even in a state where it has become illegal. This seems unlikely. While some providers did flout the law and provide women with abortions before Roe in 1973, the ubiquity of digital surveillance and other mechanisms for violating the privacy of women seeking abortions have made it far more difficult for them to do so privately and safely. Trigger laws are already forcing medical professionals to consult lawyers before they provide care, and laws that criminalize abortion leave health care workers with little incentive to violate them. When faced with the prospect of prosecution or losing a medical license, how many doctors will take this risk, even when money is offered? Meanwhile, anti-choice conservatives are already working to make it harder to access abortion pills.

Some believe abortion bans won’t affect them because they’ll never find themselves in need of an abortion. Conservatives might imagine the typical woman who needs one fits an archetype: poor, single, liberal, promiscuous, anti-family and irresponsible. But most women who get abortions are already mothers (60 percent). Nearly half of abortion seekers live below the poverty line, but a significant portion are not poor. (Women with higher incomes have more access to contraception, but that dynamic might change if the Supreme Court follows through on Justice Clarence Thomas’s suggestion to revisit earlier rulings, including the right to contraception.) Conservative families also include teenagers and young women whose privacy, autonomy and ability to seek medical care, regardless of whether their parents approve, will be severely compromised by abortion bans.

The reality is that women from every demographic need abortions. Well-off conservative women are not immune to contraception failures, gynecological emergencies, miscarriages, incest or rape. Many women find that despite their beliefs, carrying a pregnancy to term is just not something they can go through with, for a range of reasons. Pregnancy itself can be life-threatening for women with certain pre-existing medical conditions, and even for women who don’t have those risks, it is life-altering. The kind of person who might need or want an abortion is, put simply, any person capable of getting pregnant.

There will be other knock-on effects: Roe is a privacy law, and there are implications for the ruling outside of the issue of abortion. Forced birth will take women out of the workforce in an already tight labor market. Women could be treated like criminals for having miscarriages, which are incredibly common. And women who are pregnant when their partners don’t want them to be will be more at risk for domestic violence and homicide. Individual wealth won’t prevent these outcomes either.

It is of course true that the wealthy are the least vulnerable in the new post-Roe world, and this is not a requiem for them on a tiny violin. But it is important for all parties to understand that everyone is going to participate in this nightmare, whether they realize it now or not. The wealthy unfortunately have an outsized influence on politics, so how much the bans harm them, inconvenience them or enrage them will likely affect the will of politicians to vote for and maintain abortion bans.

The overturning of Roe will affect all of us. And if you are lucky enough to be wealthy, your money probably won’t shield you.