Which Of These Iowa Democratic Polls Is The Outlier ? 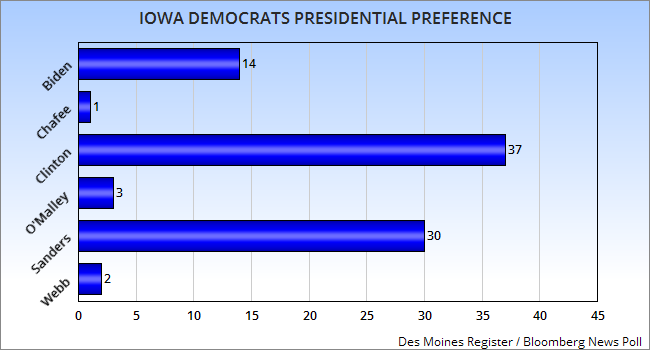 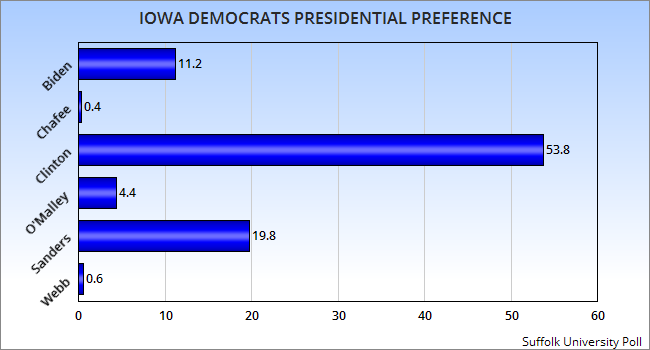 All of the cable news networks were talking about the poll represented in the top chart yesterday -- the Des Moines Register / Bloomberg News Poll. It shows Bernie Sanders within 7 points of Hillary Clinton among Iowa Democrats. But these networks seem to have a short memory. Just a couple of days ago, the Suffolk University Poll was released. It shows Clinton with a dominant 34 point lead over Sanders among Iowa Democrats.

Instead of talking about how Sanders is catching Clinton in Iowa, the news networks should have been asking how two polls could be showing such vastly differing results. One of these polls is clearly wrong. Which one is it? This can be accounted for by the margin of error (4.4 points for Suffolk and 4.9 points for DMR/BN). The difference between the two polls is 27 points -- far beyond the margin of errors combined.

Did one poll have a much bigger sample of Democrats? Not really. The DMR/BN poll queried 404 Democrats, while Suffolk questioned 500 Democrats. Those sample sizes are close enough that they can account for the huge difference between them.

I expect the Sanders supporters will believe the DMR/BN poll, while the Clinton supporters will believe the Suffolk poll -- but one of them is wrong. Which one? I honestly don't know. And I hate it when this happens with polls, because it just muddies up the picture of what is happening. We're going to have to wait and see what future polls tell us about Iowa Democrats before we'll know which poll is the outlier (a poll that differs from all others).
Posted by Ted McLaughlin at 12:04 AM