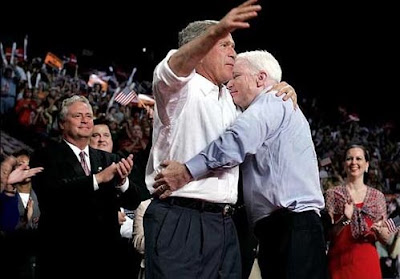 Our friend Pico over at Wild Chihuahuas (an Arizona blog) tells us that John McCain is having some troubles with fund-raising in his own home state. He was supposed to have a fund-raising event with George Bush in the Phoenix Convention Center, but that event has now been cancelled.
The White House said the event had been moved to a private venue because McCain preferred it that way. However, other sources say they were having problems selling tickets to the event. They realized they were not going to come anywhere near filling the venue. In fact, it looked like the anti-war protesters would outnumber the McCain supporters!
I would think a campaign is in trouble when it can't fill a venue like the convention center in the largest city of the candidate's home state. That has to be an embarrassment.
Posted by Ted McLaughlin at 12:03 AM