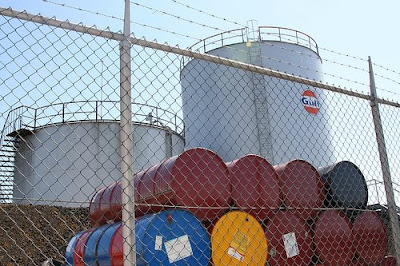 Bush continues to play politics with the high price of gasoline. He has now lifted presidential restrictions on off-shore drilling for new oil. In that way, he's trying to get the American public to believe that high gas prices are the fault of Democrats because they won't allow new off-shore drilling.
Bush says the new drilling he is proposing would cure a "shortage" of oil in the long-term, and the psychology of the new drilling would result in a short-term drop in prices. Of course, this is pure horse-hockey. The big oil companies are not about to give up their record profits because of the "psychology" of some new oil leases, especially since they already have 68 million acres of leases they have not drilled in yet.
Democrats have asked the president to release some of America's strategic oil reserves to correct the perceived shortage. Bush has refused to dip into the oil reserves. Why? Because he knows there are no real shortages. It's just a game being played by his oilmen buddies to keep making their record-breaking profits.
Even those who admit there is currently plenty of oil want to play the "shortage" game. They claim the shortage is in gasoline because the U.S. doesn't have enough refining capacity to meet the demand in this country. This is also a lie.
The truth is that plenty of gasoline is being produced, but record amounts of diesel and gasoline are being EXPORTED from the United States to other countries at record levels. Gasoline exports to just one country (Canada) has jumped from 9,000 barrels in 2007 to 41,000 barrels in the first four months of this year.
Just look at gasoline exports for one month this year. During April, big oil exported an average of 202,000 barrels of gasoline each day from the United States to other countries. In April of 2007, 116,000 barrels a day were exported. If there is a shortage of gasoline (or oil), then why are we exporting so much to other countries?
For the first four months of this year, exports of American refined petroluem products (diesel, gasoline, etc.) were up 33% to about 1.6 million barrels each day. At the same time oil companies are complaining about a shortage of refining capacity, they are shipping huge quantities out of the country.
The truth is that if these exports were outlawed, there would be plenty of gas here and the price would fall so they could sell it all. But Bush is not about to do that. That would lower the oil company profits from obscene to merely outrageous. He wouldn't do that to his oil buddies.
So don't let the Republicans tell you the gas prices are high because Democrats won't allow off-shore drilling. The prices are high because the oil companies have created a false shortage by shipping our gas to the highest bidders in other countries. That's why they're getting record windfall profits even though the price of oil has risen.
These are multi-mational companies who care nothing about the American consumer. Bush and Cheney (and McCain) don't care either.
(Hat tip to M YU of Social Seppuku for the article on petroleum exports).
Posted by Ted McLaughlin at 12:03 AM