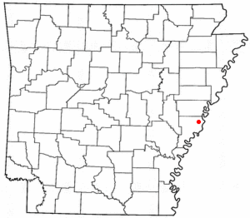 This is an unbelievable story. For the last week, the Arkansas city of Helena-West Helena has imposed a 24-hour curfew on a 10 square-block area of the city. They said they did it because the area is crime-ridden. The police carried military rifles and had the authority to stop anyone in the area at any time of the day. If the person acted nervous or didn't have a "good" reason for being there, the police would search them and their vehicle.
That was outrageous enough, but now the city council has gone even further. The curfew was supposed to end last Tuesday, but instead, the city council voted 9-0 to extend the 24-hour curfew to the entire city. That means no one has the right to be outside their home anywhere in the city unless they can justify it to the police.
The city government has tossed out the U.S. Constitution and created their own police state. The ACLU tried to tell them their actions were unconstitutional, but the council ignored them. The city's mayor says "some infringement on constitutional rights is OK".
He is wrong. It's not OK to violate the Constitution. Our forefathers created that wonderful document because they didn't want to live in a country that wasn't free, and they didn't want us to have to live in a police state either.
I expect the ACLU will take these idiots to court and win. I certainly hope so. It is important that behavior like this is quickly stamped out before it can spread. Our freedoms are too important.
Posted by Ted McLaughlin at 12:06 AM