The Antichrist Is --- John McCain ? 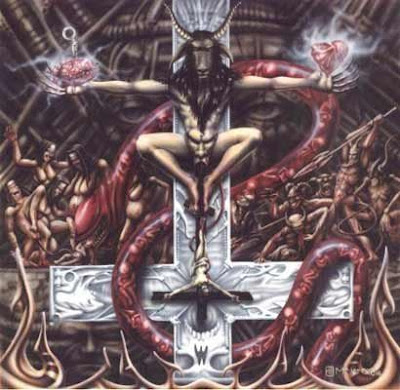 I'm not a religious person, but I found this story both interesting and amusing. Especially since the McCain campaign ad with the Left Behind images that seemed to infer that Obama was the Antichrist. It looks like some evangelical christians do believe a presidential candidate may be the Antichrist -- but they think it is John Sidney McCain!
The True Bible Society in Colorado Springs have come to the conclusion that John McCain may actually be the Antichrist. Their findings will be published next month in the End Times Journal.
“What started us looking at this issue is the fact that Senator McCain has declared his intention to maintain US forces in Iraq for a hundred years,” said David Jenkins, a leading Biblical scholar. “That means that McCain wants to control Babylon for at least a century....We believe that the End Times is near, based on the pattern of wars, earthquakes. and other strange phenomena we’ve been witnessing since the start of the New Millennium,” said Jenkins. “Given that it may be imminent, the person who controls Babylon must be the Antichrist.”
The TBS scholars said their belief was strengthened when they learned that McCain's great-grandfather was actually named John Mihai. Mihai is an ancient Romanian name, and many christians think the Antichrist will be Romanian.
“What clinched it for us was that the name Mihai means ‘who is like the Lord,’” said Jenkins. “As far as we’re concerned, that was enough. It means that McCain might easily pretend to be the Redeemer.”
The next time your evangelical neighbor wants to bring religion into this presidential race, throw this at them. But stand back -- their head may explode!
Posted by Ted McLaughlin at 12:02 AM