Teabaggers - As Mean-Spirited As It Gets 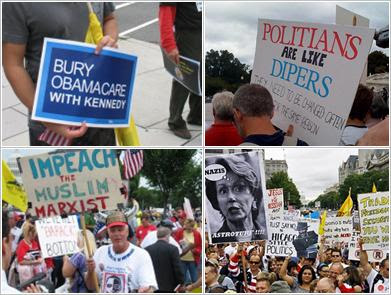 We've known for a while now that the teabaggers are a racist and generally mean group of people. All you have to do to know that is to read their signs (some of which are pictured above). But even knowing that, I didn't really realize the depth of their hatred for their fellow Americans until their behavior at the recent Republican debates exposed it on nationwide television.

The first example of this occurred in the GOP presidential debate in California when Rick Perry was questioned about the death penalty (since Perry has presided over more executions than any other governor -- at least 235 by now). The teabagger crowd cheered the death penalty. Although I don't agree with it, I can understand at least a little why someone might believe in the death penalty. Some criminals commit some really horrendous crimes. But shouldn't the state's taking of a life, even that of a heinous criminal, be an occasion for solemnity and introspection -- not a blood-thirsty celebration of death?

Then at the GOP debate in Florida the teabaggers got even worse. They actually cheered and approved of letting a person die simply because that person could not afford health insurance -- a person who's only "crime" was being too poor to pay the outrageously high premiums demanded by private insurance companies. What the hell is wrong with these people? Do they really not care that many of their fellow citizens are needlessly dying? Or is it just OK for their fellow Americans to die as long as they can save a dollar or two in taxes? Either way it sounds downright immoral to me. It seems a strange way for people who claim to follow the teachings of Jesus to act (and most teabaggers do claim that).

Then we come to the GOP debate held a couple of nights ago. An active-duty soldier asked the candidates what they would do with a gay soldier like himself -- a valid question since DADT was just repealed and the GOP candidates have spoken out against that repeal. What did the teabagger crowd do? They booed him. That's right. They booed an active-duty American soldier who has served in Iraq and put his life on the line for their freedom. And making matters worse, not a single presidential candidate in the debate spoke up to defend that soldier. What happened to "support our troops"? Is that support limited to heterosexual (and probably white) soldiers?

The teabaggers in all three of these situations should be ashamed of themselves, but I doubt that any of them are. Once again the teabaggers have exposed themselves as not just racist, but bigoted and mean-spirited people. And that seems to be all right with the GOP candidates as long as they can get their votes.
Posted by Ted McLaughlin at 12:04 AM