Is Nikki Haley The GOP Antidote For Donald Trump ? 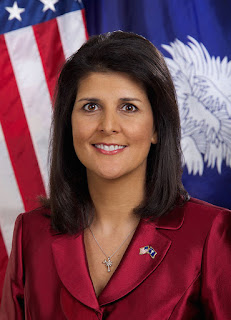 There has been a lot of talk in the last few days about the damage Donald Trump is doing to the Republican Party with his wild accusations about the undocumented immigrants in this country -- especially those from Mexico. Trump called them rapists and murderers, and accused them of bringing diseases to this country.

The Republican leadership had sort of pushed immigration in the background, in hopes of appealing to Hispanics in the 2016 election. They have done very poorly among Hispanics in the last two presidential elections, but it hasn't always been that way. For instance, George W. Bush was able to corral about 40% support from Hispanics -- far more than either McCain or Romney was able to do (both of whom finished in the low twenties percentage-wise).

But those GOP hopes have been dashed by Trump's actions in the last few days. What is the Republican Party to do. Should they just write off the Hispanic and immigrant vote?

I think they probably won't do well among Hispanics in 2016, but there is a candidate they could tap to help them -- Governor Nikki Haley of South Carolina. She has gotten a lot of good press recently by leading the fight to remove the Confederate flag from government property in that state, and her stance probably appeals to a lot of Independent voters (the voters who will decide the next election). In addition, she is a minority, and the daughter of immigrant parents (her parents being Sikhs who emigrated to the United States from India). And she was popular enough, even before the flag controversy, to have been elected twice to the South Carolina governorship. She is also attractive and well-spoken (far from the dim-bulb that Sarah Palin was).

I don't think Donald Trump will win the GOP nomination, but even if he doesn't, there is a lot of damage control to be done. They could get a good start on that by nominating Nikki Haley to be their vice-presidential candidate.

Don't get me wrong -- I don't like Nikki Haley's conservative politics. But I do think she's probably the best VP candidate the Republicans have.
Posted by Ted McLaughlin at 12:06 AM