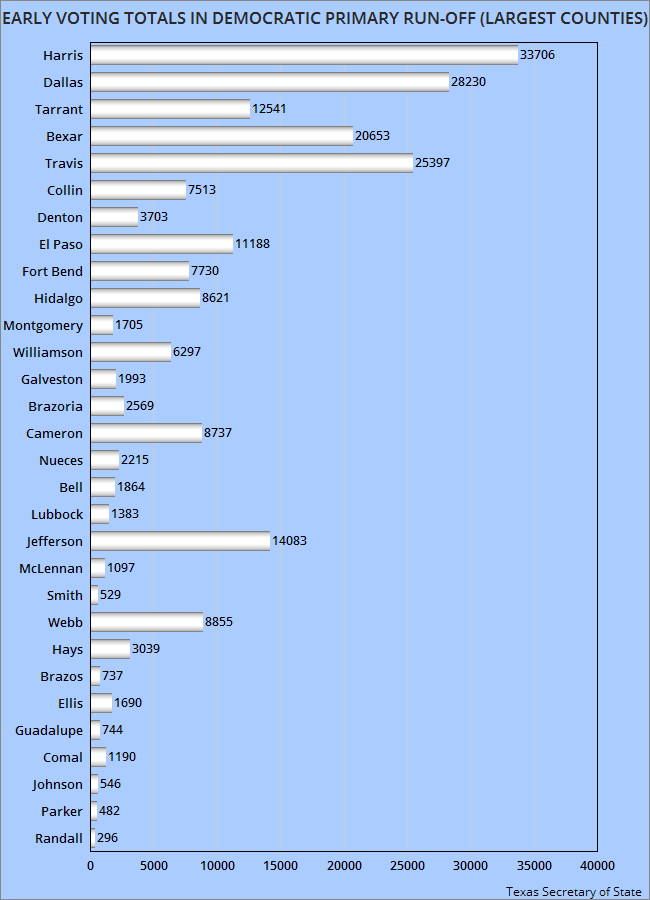 The Texas Democratic Party had some run-offs to be settled. Most prominently was in the race for Governor, where Lupe Valdez faced Andrew White. Valdez led in the March primary, but didn't get 50%.

Run-off early voting was only held for 5 days -- compared to 11 days in the March primary. So it's not surprising to see fewer people voting in a lot of the counties. Also, fewer people tend to vote in run-offs than in the primary. We'll have to see how strong the turnout is on election day -- Tuesday May 22nd.

I don't have a clue as to how the governor's race candidacy will turn out. Fortunately, I like both candidates, and can easily support either in the November election. I urge my fellow Democrats to vote in the run-off. If you didn't vote early, then please do that on Tuesday. It would look good to have a strong showing, plus the fact that Texas Democrats need to get in the habit of voting in EVERY election and run-off.

Too often in the past, Democrats have not bothered to vote because they didn't think we had a chance of winning. Texas is changing though, and this year we do have a chance -- but only if we all make sure to vote!

The early voting numbers in the chart above are from the office of the Texas Secretary of State.
Posted by Ted McLaughlin at 12:08 AM