Have The Debates Mattered In The Democratic Race? 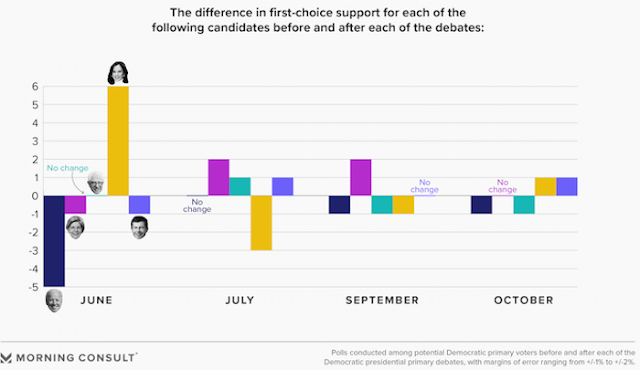 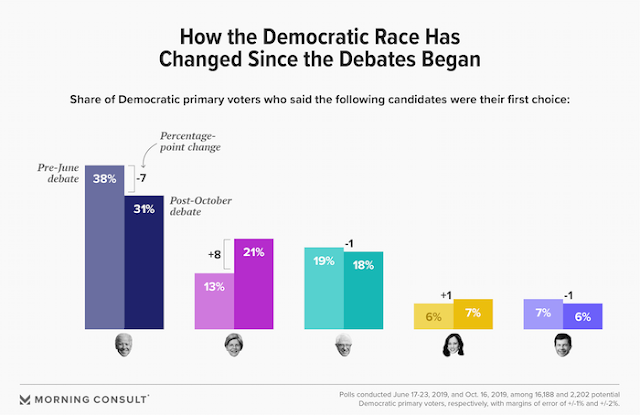 These charts are from Morning Consult, and reflects their polling in the Democratic race for the party's presidential nomination. The top chart shows the change reflected in the polls before and after each debate among the five leading candidates (Joe Biden, Elizabeth Warren, Bernie Sanders, Kamala Harris, and Pete Buttigieg). The second chart shows the change in support for each of those five candidates from before the first debate to after the October debate.

The first debate seemed to shake up the race, and it seemed to make Kamala Harris a significant player. But with each succeeding debate, less change was noticed -- the the race settled down to pretty much where it was to begin with -- with one exception (Warren took over second place from Sanders).

Actually, the only significant changes from before the first debate to after the last one is for Biden and Warren. Biden has lost 7 points and Warren has gained 8 points. Personally, I don't think the debates had much to do with that. It's far more likely that Warren has gained because she's running a very good campaign, and Biden has dropped because he doesn't have a dynamic campaign (at least not yet). The other three candidates are within 1 point of where they were before the debates.

Frankly, the debates (at least so far) seem to have been an exercise in futility. That may or may not change when the field narrows down and there are less candidates debating.
Posted by Ted McLaughlin at 12:06 AM