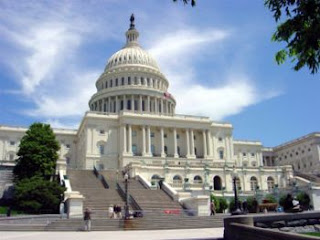 Congress and President Bush moved closer to a legal showdown this week. On Wednesday, the House Judiciary Committee approved contempt citations by a 22-17 vote. The citations are for ex-White House attorney Harriet Miers and White House Chief of Staff Josh Bolten.
Congress had issued subpoenas for the two of them to testify about the political firings of several federal prosecutors. Bush told both of them not to testify, claiming they had immunity from testifying due to "executive privilege". Neither testified, thus prompting the contempt citations. The citations will now go to the full House to be voted on -- probably in early September.
Since Democrats have a large majority in the House of Representatives, it is almost a foregone conclusion that the citations will be approved by the full House. Normal procedure would then dictate that the citations, punishable by a $100,000 fine and a year in jail, be sent to the Justice Department to be enforced.
But Bush has done more than order his flunkies not to testify. He has also ordered the Justice Department not to enforce the citations. His political appointees in the Justice Department say they will honor his wishes and refuse to enforce the citations.
Bush cannot be allowed to get away with this kind of behavior. If he gets away with ordering the Justice Department not to do their job, it would effectively be the end of any congressional investigations of his rotten administration. He would be able to break any law he wished and then block any investigation that arose.
Bush has claimed for himself more than presidential powers. He claims the powers of an absolute monarch. Congress has the right to investigate presidential wrongdoing. To deny them this right is to place the president above the law. In a democracy, no man is above the law -- not even the president.
There is only one reason why Bush would go to such lengths to keep his underlings from testifying -- he is trying to hide something (probably criminal behavior). His plea for "executive privilege" is just a ploy to hide his own criminal behavior.
If the Bush appointees in the Justice Department refuse to do their job, Congress should bypass them, and instruct their own attorneys to go to court to enforce the citations. Bush cannot be allowed to thwart the law to protect his own criminal actions.
Posted by Ted McLaughlin at 12:01 AM