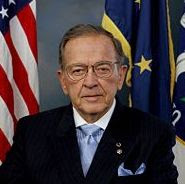 Looks like the FBI has been investigating Alaska Senator Ted Stevens for a while now. Last July, the investigation came to light when the FBI searched Steven's home in a suburb of Anchorage. They were investigating corruption among Alaska state lawmakers, and the investigation spread to include the Republican senator from Alaska.
It seems that Alaska businessman and political patron of Stevens, Bill Allen, told federal prosecutors that he had paid for the renovation of the senator's home. Stevens countered with a "non-denial" denial. He said he had paid all of the bills he received. That may be true, since the bills went to Allen -- not Stevens. Stevens may deny his corruption, but having others pay your bills under the table certainly sounds like corruption to me.
Now it seems that the FBI may have been investigating Stevens before the raid on his ill-gotten house. Government sources have verified that Allen consented to the taping of conversations between him and Stevens. Several conversations were taped.
Allen was cooperating with federal government investigators, because they had evidence he was bribing state officials. Was he also bribing Stevens? Sure looks that way. What else could the taped conversations be about? We may soon find out that the payoffs went beyond a few home renovations. The investigation is still going on.
Republican corruption is the gift that just keeps on giving. Is there any end to it? Just when you think it couldn't get any worse, along comes another Republican guilty of either political or moral corruption.
I can hardly wait for that buffoon Stevens to be charged -- no one deserves it more.
Posted by Ted McLaughlin at 12:04 AM