A Tax Cut That Makes Sense 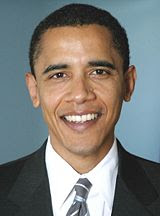 Presidential candidate Barack Obama has proposed a tax cut program. But this is not like Bush's tax cuts for the rich. Obama proposes a tax cut for the middle and working classes, and he thinks the rich should pay for it.
Finally, we get a tax cut proposal that makes some sense. All Bush's tax cuts did was fatten the wallets of the rich. It did very little to help the economy overall. That's because Bush still believes in the long discredited "trickle down" approach to economics. But while Bush helped the rich get even richer, nothing trickled down to the other classes.
Obama knows better. He knows that money doesn't trickle down in a capitalist economy -- it moves upward. To really get the economy moving, you must aim tax cuts at the working and middle classes. The rich will also be helped, but only after the money moves through the other classes and lifts the economy as a whole.
Obama's plan would give a tax credit of up to $500 per person, off-setting the payroll tax on the first $8100 of income. The cut would phase out at incomes between $150,000 and $200,000 a year. He would also give homeowners who do not itemize a credit of $500 a year, and completely eliminate income taxes for senior citizens making less than $50,000.
He would pay for these cuts by closing corporate tax loopholes. Obama said, "Instead of having all of us pay our fair share, we've got over $1 trillion worth of loopholes in the corporate tax code. This isn't the invisible hand of the market at work. It's the successful work of special interests."
He also called for an increase in the tax on capital gains and dividends for the richest Americans, and said he would crack down on offshore tax havens and act to keep hedge funds from avoiding taxes.
What a novel approach to taxes -- to make the rich and the corporations actually pay their fair share, instead of dumping the burden on the middle class.
Posted by Ted McLaughlin at 12:06 AM