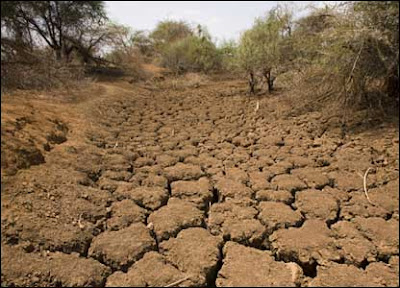 Two of the policies that Republicans love the most are a hatred of undocumented immigrants (and the wish to deport those here and prevent others from entering) and the denial of global climate change (because to admit it is real would force them to take action to rein in the excesses of their rich buddies in the oil, gas, coal and power-generating industries). This is why they are going to great lengths to prevent both immigration and energy reform.
But trying to push both of these policies at the same time is a little like trying to have a cake and eat it at the same time -- the two things are conflicting interests. Consider the following report published in the Proceedings of the National Academy of Sciences regarding the link between global climate change and illegal immigration.
According to the scientists, global climate change is going to keep getting steadily worse in the coming years as the level of the oceans rise and many countries will experience severe drought. One of the worst hit countries to experience these climate changes will be our neighbor to the south, Mexico. Many of the rural inhabitants of Mexico will no longer be able to support themselves as Mexican agriculture becomes untenable.
So what will these people do? They will do just as their fellow countrymen in the past have done. They will come to the United States to find a way to survive and feed their families. The scientists are predicting that in the next fifty years the U.S. will see an influx of possibly 6.7 million more undocumented immigrants (possibly even as much as 10% of the Mexican population).
Now I know some will claim we just have to close down the border with Mexico. That's a lot easier to say than it would be to do. It would take a massive amount of police, immigration officials and troops to even try to shut down the border between the two countries. Even then I'm not at all sure it could be done. The border covers thousands of miles, and that doesn't even consider our two enormous coastlines (and an even bigger and even easier to cross border with Canada).
Don't underestimate the persistence and ingenuity of desperate people. People will go to great lengths to feed, clothe and house their families -- regardless of what the laws are or how many people there are enforcing it. If the global climate change gets bad enough, we would have to turn this country into a police state to even begin to control the illegal immigration (and while that would do away with many of our freedoms, it probably wouldn't keep the immigrants out).
The only real solution is to stop denying the reality of global climate change and quickly take action to reduce our use of carbon-based fuels and reverse the dumping of greenhouse gases into our atmosphere. If we could slow down and then stop the climate change before it reaches a critical level (which it is fast approaching), then the situation in Mexico might not reach a level that would force millions of new immigrants over the border.
But to do that the Republicans would first have to admit that they are wrong. I'm not even sure that is possible. They have proved unable to admit their errors in the past. Just look at the disastrous policies of George Bush that wrecked the American economy. Republicans are still pushing those same policies even though it's obvious to any thinking person that those policies would still be disastrous to our feebly-recovering economy.
No, the Republicans are currently unable to admit they were (and are) wrong. That is why they must be prevented from returning to power -- at least until they develop new leadership that's willing to deal with the real world (and that could take a long time). For the time-being they will blissfully carry on, unable to even realize that their own policies are unrealistic and actually conflicting.
Posted by Ted McLaughlin at 12:04 AM