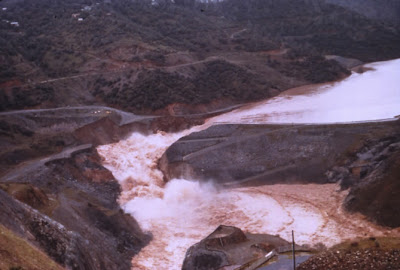 It has become obvious with all the budget cutting the Republicans, both on the federal and state levels, have been doing that they have no intention of budgeting any money to improve this country's infrastructure. They ignored our crumbling infrastructure throughout the Bush presidency (cutting taxes for the rich was far more important). Now they are killing projects such as high-speed rail and a stimulus program to rebuild our roads and bridges.

Those projects would have provided badly needed jobs and helped American businesses by improving transportation -- both worthy goals. But the Republicans are not in a mood to rebuild the country or provide for jobs. But there is another type of infrastructure that also needs some attention -- dams.

According to the Association of State Dam Safety Officials, this country has more than 85,000 dams. Over 4,400 of those dams are in need of repair. And a failure to do these repairs in a timely fashion will not just impede business and job growth -- it could put lives in dangers and cause the destruction of millions of dollars worth of property, including some whole cities.

Ignoring dams is not the same as watching a pothole grow larger in a road. We learned that in New Orleans during Hurricane Katrina. The dams there that were not properly maintained wound up costing that city far too many lives and far too much damage. Now it looks like the Republicans, in their budget-cutting zeal, want to repeat that mistake in other areas of this country.

While cutting the budget may be a laudable goal, it is not nearly as important as creating jobs and maintaining our important and necessary infrastructure. Cutting the budget won't create jobs or save lives and property, but rebuilding and maintaining our infrastructure will save lives and create jobs -- and those new jobs will help pay down the deficit (and doing away with the Bush tax cuts will pay it down even faster).

As usual, the Republicans are going at things the wrong way.
Posted by Ted McLaughlin at 12:06 AM