How Low Will Republican Politicians Go ? 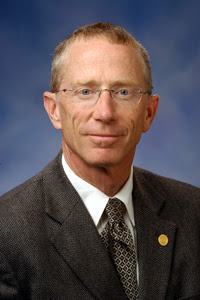 I have written many times about the wrong-headed and failed economic policies of the Republican Party, and the mean spirit shown by some of their politicians. But every now and then one of these Republican politicians will do something so shockingly mean that it simply takes my breath away. The latest of those is State Senator Bruce Caswell of Michigan.

Senator Caswell (pictured) has decided that foster children and children of the poor don't deserve any new clothes -- not even inexpensive clothing from a discount store. He wants a law that would take the state money set aside to help clothe these children and turn it into a "gift card" (state voucher) that could only be used at a second-hand store like Goodwill, Salvation Army, or thrift stores like them.

I am so aghast at Caswell's proposal that I'm left virtually speechless. So I will give you the words of the great blogger at The Immoral Minority, who probably says it better than I could anyway:

"I almost don't know what to say about this.  I am stunned at this man's complete lack of compassion and empathy for the foster children in his state.

I don't like to talk about what I do for a living, but let me just say that I often work with disadvantaged children, including some in the foster care system, and I know first hand what kind of stigma these kids deal with every single day.

They are ripped from their families, often through no fault of their own, and find themselves bouncing from one foster home to another for years, feeling unwanted and unloved. They can suffer from a crippling lack of self esteem, and find themselves on the outside of EVERY social clique in their school, knowing full well they simply are not like the other children sitting their classrooms.

Why would you make children who already feel like cast offs themselves, walk around in cast off clothing?

Does this sorry excuse for a human being have ANY idea what kind of self esteem boost one of these kids gets from having the opportunity to go to a regular store like Old Navy, or Nordstroms, or even Wal-Mart, and pick the clothes that THEY want to wear? To know that those clothes were purchased JUST for them, and are NOT just something a wealthier kid had no more use for?

Well I have. And I have seen them wear those clothes as often as they can until they have literally grown right out of them. I have seen them crying with concern that their foster parent will not have the money to buy anything so "cool" the next shopping trip. And I have also witnessed the sense of pride they feel as they fold them up carefully and take them to the Salvation Army, so that somebody in a worse situation than they are will have the opportunity to wear the clothes that they took such pride in wearing, and that they took such pains to keep in near perfect condition.

I would suggest that this gentleman go along on a shopping trip with a foster family and see for himself how it can light up a child's face to pick a beautiful dress and know that, unlike most of the things in their lives, it is just for them.  Perhaps it is hard for those of us who can get in our car and buy ourselves a new pair of pants anytime we want, to understand the joy these children feel at such a simple opportunity. But have no doubt that it can do wonders in making them feel special, and loved, and wanted."

I am reminded of the old saying that one can let others think they are stupid or they can open their mouth and remove all doubt. Caswell has removed any doubt of his stupidity and downright meanness. It is one thing to have policies that favor the rich and allow them to corner much of the nation's wealth. It is quite another to single out poor children for humiliation. It is not just ignorant, but shameful. If he had a shred of decency he would resign and never appear in public again after begging for forgiveness, but he seems to be proud of his views -- and that says a lot about him.
Posted by Ted McLaughlin at 12:06 AM