Little Support For An Attack On Syria 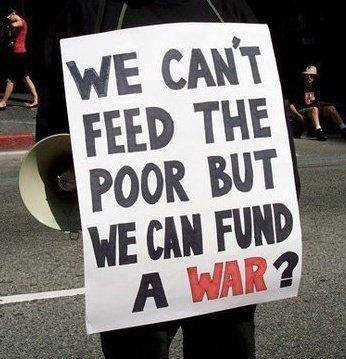 (The image above is from the Facebook page of The American Progressive.)

It is certainly no secret that the Obama administration is preparing to launch a military attack on Syria. They have spent days now trying to justify such an attack, even going so far as to claim that the security of the United States is at stake. The American people are not buying that argument, and several polls have shown that most Americans are against launching an attack on Syria -- even if the Syrian government has used chemical weapons against the rebels.

Now it looks like international support for such an act is dwindling. There will be no United Nations resolution authorizing such an attack, since both Russia and China have made it clear that they would block any such resolution. Instead, the Obama administration had hoped to have the support of NATO (or at least most of the strongest NATO nations) and participation by NATO in an attack. Unfortunately for the administration, it looks like that probably won't happen.

The German government says it has not been asked, and is not considering, any military action against Syria. And the British Parliament voted to deny their Prime Minister the right to engage the British military in an attack on Syria. In fact, there is only one NATO nation that is willing to help the U.S. attack Syria, and that is France (which is trying to save face after recognizing the rebels as the official government of Syria).

Even most of the nations in the Middle East are against the attack. Iran, Egypt, Jordan, Lebanon, and Iraq have all come out against such an attack. The only nations there that might support the United States in an attack are Turkey (early supporters of the rebel uprising) and Saudi Arabia (which has been providing money and arms to the rebels). Israel has hinted they would like to see an attack, but they could not participate (since that would cause more problems in the region as a whole).

So it boils down to the United States, France, Turkey, and Saudi Arabia against everyone else -- including a majority of the American public. An attack on Syria at this time is just a bad idea. Hopefully, the Obama administration will come to its senses before deciding to make this reckless attack a reality.
Posted by Ted McLaughlin at 12:04 AM