The Difference Between The Party Bases 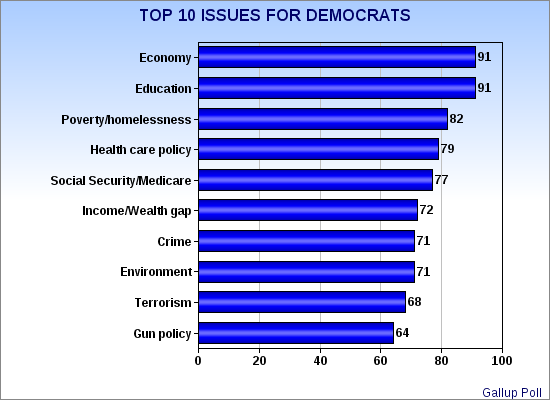 I thought this survey was interesting. It is a Gallup Poll (done between January 5th and 8th of a random national sample of 1,018 adults, with the margin of error of the Democratic and Republican groups being 5 points).

The survey shows the issues that each party considers most important. And note, this is not the opinion of those in Congress, but the opinions of the base voters in each party. Surveying these results, it becomes obvious that the most important issue in both parties is the poor economy -- and that means that will probably be the overriding issue in this year's election.

Republicans will once again try to convince voters that the economy can be improved by cutting taxes more for the rich and the corporations, and by cutting government spending more (except for the military). It will be up to the Democrats to remind voters that this is a failed policy -- and the policy that got us into this economic mess in the first place.

Democrats need to run on raising the minimum wage, protecting Social Security and Medicare, providing help for the poor and the unemployed, funding education adequately, and making the rich & corporations pay their fair share of taxes. But most important, they need to explain how doing these things will help the economy (and it will).

Personally, I would much rather be trying to make the Democratic argument this year. I believe it is starting to resonate with the public.
Posted by Ted McLaughlin at 12:06 AM