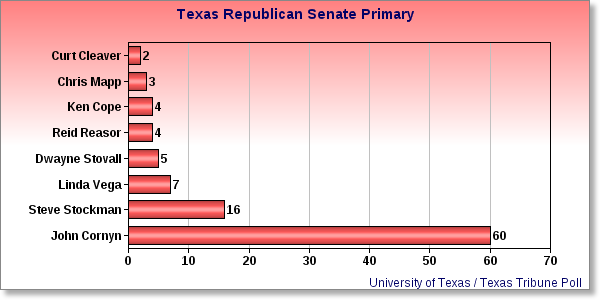 Last week the ultra-right-wing Human Events publication released a poll on the senate race in the Texas Republican Primary. That poll showed incumbent John Cornyn with 43%, Steve Stockman with 28%, and unsure voters at 29%. They concluded that the poll showed Stockman was gaining on Cornyn -- and since Cornyn didn't have 50%, there was a chance he could lose.

I said at the time that it sounded like a Stockman supporter trying to put the best spin possible on a bad poll, and I went on to say I thought Cornyn would easily win the Republican Primary. Now a new poll (and a much more bipartisan poll) has been released. It is the University of Texas / Texas Tribune Poll (taken between February 7th and 17th of 543 Republicans (with a margin of error between 4.21 and 5.37 points) and 381 Democrats (with a margin of error of between 5.02 and 6.06 points).

The UT/TT Poll shows Cornyn is in a much more commanding position, garnering about 60% support to only 16% for Stockman. I believe that is probably what will happen on primary day (March 4th). The Texas Republican Party is ruled by teabagger elements, but they are not really that unhappy with Cornyn. They know he has one of the most right-wing voting records of anyone in the U.S. Senate.

I would like to see Cornyn defeated next November, and that would be a lot easier to do if Stockman somehow became the candidate because he's a total nut-job (and would scare the hell out of a lot of Independents). But Cornyn will win his primary, and that makes it much more important that the Democrats nominate a good candidate -- a progressive that offers a real alternative to the voters. And that's why the poll of the Democratic candidates worries me quite a bit. 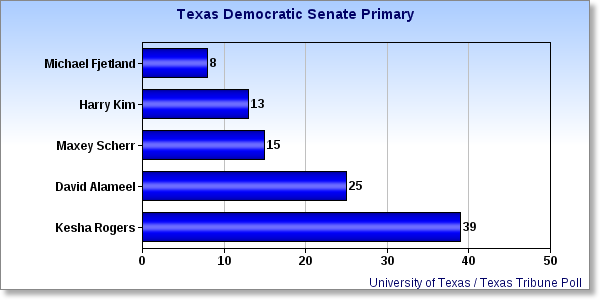 Why does this worry me? because the UT/TT Poll shows Kesha Rogers leading by a fairly significant margin. There are four true Democrats in the race (ranging from progressive to blue dog) -- but Kesha Rogers is not one of them. She is a follower of Lyndon LaRouche, who believes President Obama should be impeached and the Queen of England is the head of an international drug cartel (among other nutty beliefs). She is even nuttier than Steve Stockman.

I sincerely hope this poll is wrong, and just shows an ignorance of who the candidates are. Even if Rogers were to win the primary, I could never support or vote for her -- and I don't believe the state party apparatus would provide any support for her either. She would just be a real embarrassment for the Democratic ticket. I urge all Democrats to vote for the candidate of your choice -- any of the other four candidates (my personal choice is Maxey Scherr). But please don't vote for Kesha Rogers. It will be difficult enough for Democrats to win in November without this albatross around their necks.
Posted by Ted McLaughlin at 12:02 AM