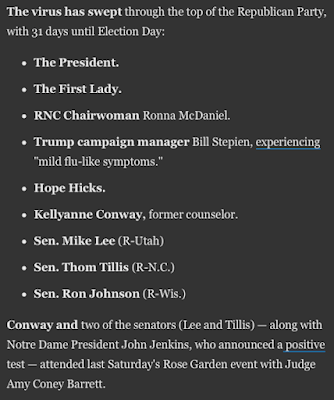 A week ago, it looked like nothing could stop the GOP from approving Trump's nomination to the Supreme Court. There was nothing the Senate Democrats could do to stop it.

But that was before another player entered the fray -- COVID-19. Now the GOP officials are dropping like flies -- coming down with virus infections. Three GOP senators have now tested positive for the Coronavirus, and two of them are on the Judiciary Committee (which would consider the nomination).

Here's part of how The New York Times is covering this story:

Mitch McConnell, the Senate majority leader, announced on Saturday that the Senate would not meet as planned next week after three senators tested positive for the virus, but indicated that Republicans would press ahead to confirm Judge Amy Coney Barrett to the Supreme Court without delay.

“The Senate’s floor schedule will not interrupt the thorough, fair and historically supported confirmation process previously laid out,” Mr. McConnell, Republican of Kentucky, said in a statement, adding that the Senate Judiciary Committee had “successfully” met with senators appearing both in person and virtually since May.

The announcement comes after three members of Mr. McConnell’s conference, two of them on the Judiciary Committee, have tested positive for the coronavirus in the last 24 hours. Others, like Senator James Lankford of Oklahoma, have tested negative but have gone into quarantine.

Ron Johnson of Wisconsin, the third Republican senator to test positive for the coronavirus this week, was exposed to an individual earlier in the week who tested positive for the virus, according to his office, which said the senator was “not experiencing symptoms.” He did not attend President Trump’s nomination ceremony for Judge Barrett at the Rose Garden on Saturday.

Unlike Senators Thom Tillis of North Carolina and Mike Lee of Utah, who tested positive on Friday, Mr. Johnson does not sit on the Senate Judiciary Committee. But his positive test result adds new complications to the timing of Judge Barrett’s confirmation.