Outlook Is Not Good For Committee To Investigate Jan 6th 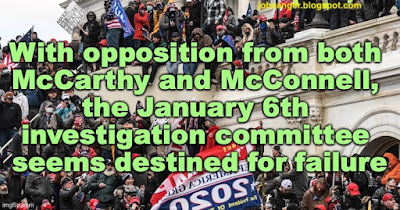 A few days ago, I wrote that the January 6th Investigation Committee had a fatal flaw. The flaw was that the committee was made up of five Democrats and five Republicans -- and it took six votes to issue a subpoena.

This is bad, because it's McCarthy and McConnell that are supposed to choose the five Republican members of the committee. Even if the committee is approved and establish by Congress, it is likely that McCarthy and McConnell will choose the more radical members of their party to sit on it (people like Louie Gohmert, Jim Jordan, David Clyde, Ron Johnson, or Rand Paul).

That would mean no subpoena could be issued to a Republican - especially those who were involved with the rioters. And without the ability to subpoena those involved, the committee would not be able to function properly.

This was a good idea, because there needs to be a thorough investigation of the January 6th riot, but it now looks like an idea that is doomed to failure!