Republicans Claim To Be The Party Of Workers - It's A LIE! 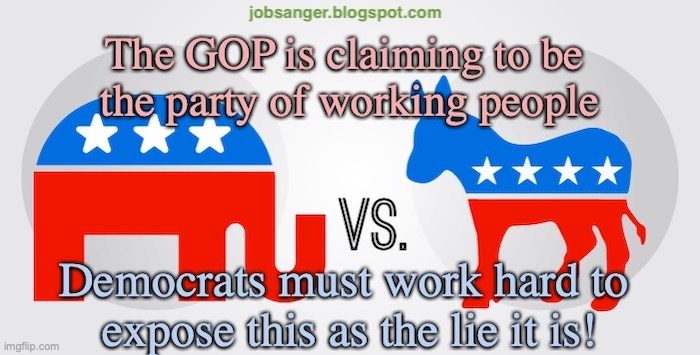 Republicans have never has a close relationship with the truth, and with the rise of Donald Trump to be their party's leader, they lie more than ever. One of the biggest lies they've ever told is a recent one -- that they are the party of working people. That's never been true. All of their policies are designed to help the rich and corporations to the detriment of working people. For the next year, Democrats must make sure the voting public understands this.

The following is part of an op-ed in The New York Times by Steven Greenhouse:

To many Democrats, it is preposterous that Republicans, long viewed as the party of corporate America, suggest theirs is the party of the working class. Even so, Democrats must resist complacency. They can’t stop fighting for the support of workers, no matter how ludicrous the Republican attempts at rebranding may seem. To do so, Democrats must deliver on their promises to workers — or else hammer home the point that Republicans blocked their efforts.

When Republicans attempt to style themselves as the party of working people, it can be awkward. In 2019 when the House voted to raise the federal minimum wage to $15 an hour from $7.25 — a move supported by 62 percent of Americans — only three Republicans backed the increase; the then-G.O.P.-controlled Senate, led by Mitch McConnell, refused to allow a vote on the increase. But the G.O.P. continues to maintain its chosen fiction: “The uniqueness of this party today is we’re the workers party,”Kevin McCarthy, the House Republican leader, said in an interview early this year. Senator Ted Cruz, Republican of Texas, agreed, tweeting, “The Republican Party is not the party of the country clubs, it’s the party of hardworking, blue-collar men and women.”

Yet Mr. Biden and company remain vulnerable to Republican attacks that they have become the party of Silicon Valley, Wall Street and “the coastal elite.” Republicans point to Democratic support for free-trade agreements that have sent U.S. jobs overseas, never mind that Republican lawmakers voted overwhelmingly to approve such pacts. Republicans also try to score points by maintaining that Democrats care more about helping immigrants than down-on-their-luck factory workers in the Midwest. . . .

To make their case to workers, Democrats need only point to Republican attacks on Mr. Biden’s agenda. Senator Marsha Blackburn, a Tennessee Republican, has compared his plan to boost subsidies for day care to Soviet-era Communism. Senators Mike Lee of Utah and Marco Rubio of Florida derided his $300-per-child per month allowance as “welfare assistance.”

Republicans have also attacked the PRO Act, a Biden-backed measure that would increase workers’ bargaining power by making it easier for them to unionize. Democrats ask: How can Republicans claim to be a party for workers while opposing the very institution, unions, that fights for workers?. . .

On paper, the party of F.D.R. is clearly more pro-worker than Republicans. But the Democrats’ big problem, time and again — one that has long rankled many blue-collar voters — is their failure to enact policies that will uplift workers (usually because of Republican filibusters).

So what can the Democrats do to cement working-class support?

Mr. Biden can use his executive authority, beyond what he’s already done, to make federal contractors increase workers’ pay and benefits. His Labor Department and National Labor Relations Board can also help boost worker pay and bargaining power.

In Congress, Nancy Pelosi and Chuck Schumer would do well to enact Mr. Biden’s ambitious infrastructure plans and pass the PRO Act. Pushing through his $3.5-trillion spending plan would also deliver big-time to workers — not only its vast ambitions on physical infrastructure, but also its provisions guaranteeing paid parental leave and stepped-up subsidies for child care.

If Republicans block these measures, that will speak loudly as to which party does corporate America’s bidding and which one goes to bat for workers. For the Democrats, the pressure is on to deliver.