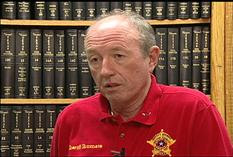 Potter County Sheriff Michael Shumate has broken his silence about the FBI investigation into his actions. But I'm not sure he's thrown any more light on the matter. According to the sheriff, his problems are all due to his ex-wife.
Shumate says he and his wife had a bitter divorce, and she promised to make trouble for him. He said she accused him of taking bribes and kickbacks from vendors who service the jail commissary (this is the first we've heard of what the charges might be).
That sounds a bit simplistic though. The FBI doesn't usually takes sides in divorce matters, or waste months investigating a public official when the only evidence is the word of an ex-wife. This investigation has gone on for months, and now the FBI has brought U.S. Attorneys into the matter. That sounds pretty serious.
Evidently Shumate's chief deputy thought it was serious also -- serious enough that he said he could not ethically continue as Shumate's employee. I don't think we've heard the last of this.
Posted by Ted McLaughlin at 7:50 AM