Noriega Has The Experience Texas Needs 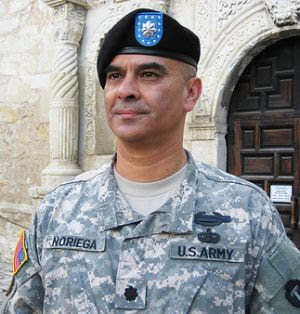 We're still several months away from the primary election here in Texas, but Texans already know who their choices are in the race for the U.S. Senate. And the two men could not be more different.
The Republican candidate is John Cornyn. Cornyn is a right-winger who blindly votes with the Bush administration, regardless of what's good for the country and Texas. Even though he has no military experience himself, he has repeatedly voted to sacrifice our brave soldiers in the unwise and unwinnable war and occupation of Iraq. Even though over 70% of Americans oppose the war and want to bring our soldiers home, Cornyn continues to vote against any kind of timetable for withdrawal.
Cornyn also opposes providing health insurance for for poor and working class children. He voted against the SCHIP bill which would have provided healthcare for children, and then supported Bush's veto of the bill. Once again he took this position even though over 70% of the population supported the State Children's Health Insurance Program. Instead of representing the people, Cornyn has simply been a lackey who votes as the White House tells him to vote.
The Democratic candidate is different -- a real man of the people, who's not afraid to stand up for what's right. Rick Noriega joined the Army in 1979. After finishing his term honorably, he went to college at the University of Houston, where he completed R.O.T.C. and became an officer in the National Guard after his graduation. He also earned a master's degree from Harvard University.
In 2004, Lt. Co. Noriega proudly served with his unit in Afghanistan. As Lt. Col. Noriega says, "It's time this state had people in Washington, D.C., who have the wartime experience to understand what is going on". He adds, "We need a change, and we need new leadership that has walked the walk, whether we're talking about the war or border issues or working in a bipartisan way".
And it's not just wartime experience that qualifies Rick Noriega. He has also coordinated efforts to help Hurricane Katrina evacuees, led his Guard unit at the Texas border to help law enforcement officials, and served as a state representative since 1999. He has been a school teacher and an energy executive. Rick Noriega has the broad experience that Texas needs.
Rick Noriega is also starting to get the endorsements of some Texas political veterans such as former Gov. Dolph Briscoe, former Lt. Gov. Bill Hobby and former Cabinet Secretary Henry Cisneros. State Rep. Lon Burnam says of Rick, "He is a fundamentally decent man who has the right head and the right heart to represent this state in the Senate".
If you haven't climbed aboard the Noriega Express, it's time to do so. Tell your friends and neighbors about Rick. And if you can, give a few dollars to his campaign -- any amount will help. Rick is the best candidate, but he's going to need some campaign dollars to get his message out to all Texans.
Texas needs Rick Noriega -- and Rick Noriega needs your help.
Posted by Ted McLaughlin at 12:06 AM