Edwards Jumps Off The Fence 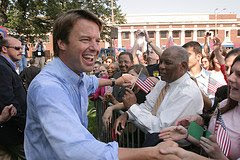 Many Obama supporters have been wondering who was going to tell Clinton that the nominating race is over -- now we know. Yesterday, in a huge Obama rally in Michigan, former presidential candidate John Edwards climbed down off that political fence and threw his support to Barack Obama.
This took whatever sting there was out of a rather unimportant loss for Obama in West Virginia on Tuesday night. While Clinton was celebrating her small-state victory, Obama gets what is probably the most important endorsement of the campaign.
In his endorsement speech, Edwards started out by extending an olive branch to the candidacy of Hillary Clinton. He urged Obama supporters to honor Clinton for her service to the Democratic Party. He is probably right about that, but it would be a lot easier to do if she would stop trying to play the "race card" and doing her best to tear down Barack Obama.
Then Edwards asked voters to tear down the walls separating Americans, especially the wall around Washington D.C. that separates Americans from their own government. He pointed out that the best way to do this is to send Barack Obama to live at 1600 Pennsylvania Avenue.
I did not start this campaign as an Obama supporter. I supported Bill Richardson and then John Edwards until each dropped out of the race. I then climbed on the Obama bandwagon, and I'm glad I did. I think he'll make a great president. It makes me proud to see that both Richardson and Edwards have now joined me on that Obama bandwagon.
Adding insult to injury for Clinton, one of the most important women's rights groups, NARAL, also threw their support behind Obama's bid for the presidency yesterday. They recognized the fact that this campaign for the Democratic nomination is over, and it's time to come together behind the Democratic nominee -- Barack Obama.
I hope Clinton can find a graceful way to exit in the next two weeks. The only thing that could prevent a Democratic victory in November is if she plays the "sour grapes" game and splits the party.
Posted by Ted McLaughlin at 12:07 AM