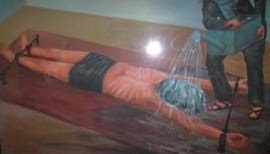 George Bush has told the world repeatedly that America does not torture the prisoners in its custody. Of course, Bush's definition of torture is different than most people's. For example, Bush has refused to ban waterboarding and says it is not torture -- only "a legal technique used in a specific set of circumstances". But the rest of the world doesn't see it that way.
Great Britain is one of those countries that doesn't believe torture is OK as long as you redefine it as something else. They are clear about it -- waterboarding is torture, no matter what definition you use. Members of the British Parliament say they can no longer trust the United States regarding torture.
A report issued by Parliament says, "Given the clear differences in definition, the UK can no longer rely on US assurances that it does not use torture, and we recommend that the government does not rely on such assurances in the future."
MPs are also asking their government to redouble their efforts to make sure that no U.S. "rendition" flights use British soil to carry their victims to countries where they will be tortured.They also won't accept U.S. assurances about these flights.
This shows just how badly the Bush administration has damaged the reputation and honor of the United States. It has reached the point to where our best and closest ally no longer trusts us.
We must vote the Republicans out of power in November to restore America's honor and reputation.
Posted by Ted McLaughlin at 12:03 AM