The Only Issue That Matters In 2008 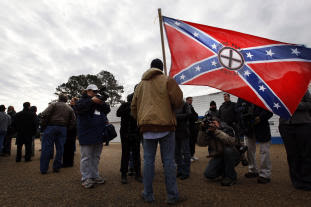 The mainstream media have chattered incessantly in this presidential race about what issues are the most important. Some would have you believe that experience is the issue that will decide who becomes president. Others say the war on terror and homeland security will be the deciding factor. Still others believe the economy will trump all other issues.
In another year, these would indeed be very important issues. But are they really the most important this year? I submit that they are not. Experience is really not as important as the media would have you think. America has shown many times in the past that they will vote for lesser experience if they like a candidate.
The argument can easily be made that Kennedy was not nearly as experienced as Nixon, but he won. The truth is that no one is truly prepared to be president, but those elected usually rise to the occasion. No one expected Truman to be a strong and capable president, but that was what he turned out to be. It is more important to be liked than experienced.
So how about the Iraq war and the overall "war on terror". I submit that this issue has already been decided by the public. The huge majority of the American people believe the Iraq war was a mistake, and the war on terror is being mishandled.
It took them a while, but most people now know it was a mistake to pull most of our troops out of Afghanistan before the job was finished, and invade Iraq (who posed no danger to us). They want to know why we attacked Saddam, when our real enemy was al-Queda. If this was really the most important issue, the Democrat would win with about 65% of the vote.
The same could be said for the economy. No matter how many times Bush says our economy is healthy, Americans know better. They also know the Bush presidency has been disastrous for everyone but the rich, and they know that all McCain has to offer is more of the failed Bush policies. Nearly 80% of Americans say America is on the wrong track economically. If the economy was really the most important issue, Democrats would win big.
And that's just what's happening in the House and Senate races. For months, huge majorities of the American people have preferred Democrats over Republicans (even though Congress itself gets low ratings). Democrats are poised to make huge gains in both houses of Congress.
The reason they are poised to do that is because the American people have already made up their minds about the economy and the war. They have already decided that the country cannot afford another four years of Republican policies.
So why is the presidential race so close? Since it is obvious that most Americans don't want the Republicans running things anymore, why are so many of them considering a vote for McCain? It is because there is one issue this year that far outweighs all the others in the presidential race.
That issue is RACISM. I know that some think we have gone beyond our racist past by nominating an Afro-American for president. But frankly, nothing has been proven yet. Obama was nominated by a coalition of blacks, liberals and young people -- the least racist elements in our society. It remains to be seen how the general population will vote.
Whether we want to admit it or not, there is still a LOT of racism in this country. Passing a few equal rights laws did not change the hearts of the populace. That is a harder and slower task. The question is has America changed enough yet? Or is the majority still racist enough to vote knowingly against their own interests, rather than vote for an Afro-American?
I can't help but think if a white male were heading the Democratic ticket, he'd probably be leading in the polls by 20%. (And don't bring Hillary into this argument. She lost, and there's no reason to think she'd do any better than Obama.) The only reason the race is currently so close is America's lingering racism.
If Obama loses, it will be because Americans are not yet mature enough to get past the race issue. I know most people won't admit it -- they'll come up with a variety of weak excuses to cover for it. But the truth is that with the overwhelming Democratic feeling in the country, the only thing that can defeat Obama is racism.
Don't get me wrong. I am an Obama supporter. I believe he is the best candidate by far, and I've waited most of my life to see a credible Afro-American candidate. I am very proud of the Democrats for nominating him, and I will vote for him proudly.
I just have this nagging feeling in the back of my brain that America has not progressed as far as we Democrats had hoped. I hope I'm wrong. November will be a test for America. Are we making progress, or is America still a very racist country? The coming election will clearly answer that question.
Posted by Ted McLaughlin at 12:04 AM