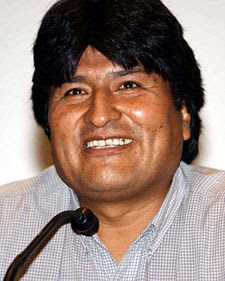 The tiny South American country of Bolivia has just signaled that it will no longer be pushed around by the United States. This week they took radical step of declaring U.S. Ambassador Philip Goldberg to be "persona non grata", and asked him to leave their country. He is expected to leave within 72 hours.
Why would they do such a thing? It seems that once again the United States has been trying to interfere with the internal affairs of another country. The Bush administration doesn't seem to be able to let other countries determine their own future. They want to dictate to other countries what policies they should follow and who their leaders should be.
In this case, newly-elected President Evo Morales (pictured above) has accused the United States and Ambassador Goldberg of conspiring against Bolivia's democracy and encouraging the break-up of the country.
Morales is the first fully indigenous person to become president of Bolivia, and he was elected to the office in 2006. Since assuming office, he has nationalized the countries gas reserves. He is trying to redistribute the proceeds from this gas to help the poor and working classes of his country. He is the first Bolivian president to really try to help the country's underprivileged (most of whom are indigenous people).
Naturally the rich don't like this. They don't want to have to share the wealth. They are fomenting demonstrations and violence, and at least one pipeline has been bombed. They want to seize control of the gas-producing parts of the country and break off from the rest of Bolivia, or at least secure enough autonomy so they won't have to share gas revenues with the rest of Bolivia.
As usual, the Bush administration has sided with the rich and against the poor. To an oilman like Bush, the poor having a decent standard of living is not nearly as important as the rich being able to become even richer.
I don't blame Morales for kicking the U.S. Ambassador out of the country. It was the right thing to do, and they shouldn't allow the U.S. to send a replacement until they can be sure the U.S. will stop trying to interfere in Bolivia's internal affairs.
--------------------
In a move of solidarity with Bolivia, President Hugo Chavez of Venezuela said he is recalling his ambassador from Washington and is expelling the United States Ambassador from Venezuela.
Chavez said, "He has 72 hours, from this moment, the Yankee ambassador in Caracas, to leave Venezuela. When there's a new government in the United States, we'll send an ambassador. A government that respects Latin America."
Posted by Ted McLaughlin at 12:03 AM