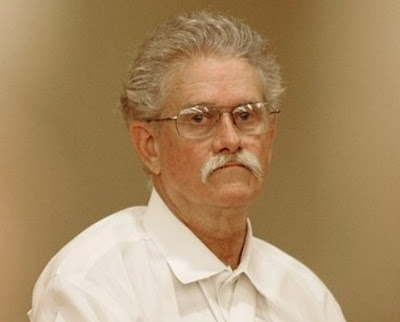 Last summer, Jim Adkisson (pictured above) walked into a Knoxville (Tennessee) Unitarian Universalist Church and opened fire with a shotgun. He killed two people and injured several others. At the time, it was believed to either be a personal crime against someone he knew, or the act of a mentally unstable person. It turns out that neither was true. This was a hate crime.

He was a complete stranger to the people in the church, and seemed to know exactly what he was doing. He was saving America from "liberals". He turns out to be a right-wing conservative nut. Police found books by Michael Savage, Bill O'Reilly and Sean Hannity in his home. He quoted from a conservative book by Bernard Goldberg, and very probably also enjoyed the hate speech of Rush Limbaugh and Ann Coulter.

He was not confused or disoriented when he committed the heinous crime against unarmed and peaceful church-goers. He was carrying out the orders of his right-wing heroes, who had filled him with the hate-filled belief that only those who agree with them are patriotic Americans, and it's OK to commit violence against anyone who disagrees -- even heroic.

On February 8th, Adkisson was convicted and sentenced to life in prison for the murders, but he still shows no remorse for his actions. In fact, he calls for other right-wingers to follow his lead and kill "liberals". He gave the Knoxville newspaper a four page "manifesto" which contained the following:

"Know this if nothing else: This was a hate crime. I hate the damn left-wing liberals. There is a vast left-wing conspiracy in this country & these liberals are working together to attack every decent & honorable institution in the nation, trying to turn this country into a communist state. Shame on them....

“This was a symbolic killing. Who I wanted to kill was every Democrat in the Senate & House, the 100 people in Bernard Goldberg’s book. I’d like to kill everyone in the mainstream media. But I know those people were inaccessible to me. I couldn’t get to the generals & high ranking officers of the Marxist movement so I went after the foot soldiers, the chickenshit liberals that vote in these traitorous people. Someone had to get the ball rolling. I volunteered. I hope others do the same. It’s the only way we can rid America of this cancerous pestilence.”

“I thought I’d do something good for this Country Kill Democrats til the cops kill me....Liberals are a pest like termites. Millions of them Each little bite contributes to the downfall of this great nation. The only way we can rid ourselves of this evil is to kill them in the streets. Kill them where they gather. I’d like to encourage other like minded people to do what I’ve done. If life aint worth living anymore don’t just kill yourself. do something for your Country before you go. Go Kill Liberals."

Adkisson is right where he needs to be -- in prison for the rest of his life. But there are some other criminals who will not be punished for their crimes. I'm talking about the people who filled him with hatred for his fellow Americans. The ones who convinced him that it's permissable to be violent toward anyone who's not a conservative.

Hannity, Limbaugh, O'Reilly, Savage, Goldberg and Coulter (and others like them who spew hate speech) are complicit in this crime.