White Loses To Everybody In Every Poll 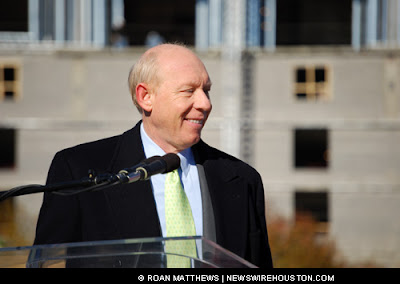 It looks like the Democratic Party establishment is going to get what it evidently wanted in the governor's race -- a weak blue dog Democratic candidate that stands no chance of winning in the general election in November. After party bigwigs ran all the viable progressives out of the race and made sure no others would enter it, the leading candidate is the "anointed one" himself -- Blue Dog Bill White, friend of the corporations.
He has no real opponents left in the Democratic primary -- just a rich Palestinian who's afraid to say what his religion is and a group of unknown candidates with no money to make themselves known. Most polls say Blue Dog Bill (pictured) will win the primary without a run-off. But that's not the hard part.
The hard (probably impossible) part will be to win in November, and nobody but hard-core Democratic Party regulars think he has a chance. The people of Texas certainly don't. There have been three polls done on the Texas governor's race, and every one of them has White losing to every Republican on the Republican primary ballot.
Frankly, I think most people figure if all they have is a choice between two corporate-owned conservatives, and that's what Blue Dog Bill really is, then they might as well vote for the one in the corporate-owned conservative party -- the Republican Party. At least the Republican candidate is being true to his/her party's principles. Blue Dog Bill opposes the principles of his party.
Here are the results of the three polls (all taken this month):
RASMUSSEN REPORTS
Perry 48%.....White 39%
Hutchison 49%.....White 36%
Medina 41%.....White 38%
UNIVERSITY OF TEXAS/TEXAS TRIBUNE
Perry 44%.....White 35%
Hutchison 43%.....White 34%
Medina 36%.....White 36%
RESEARCH 2000
Perry 46%.....White 42%
Hutchison 47%.....White 41%
Medina 44%.....White 43%
Posted by Ted McLaughlin at 12:02 AM