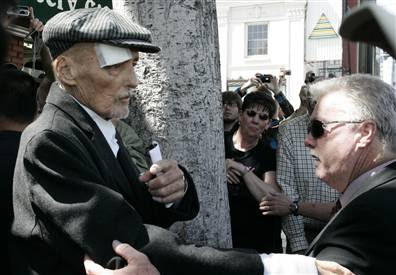 It's about time this happened. Even though they should have done it years ago, Hollywood finally got around to honoring Dennis Hopper with his own star on the Hollywood Walk of Fame. Hopper's star is located in front of the historic Egyptian Theater.
The 70 year-old Hopper (pictured) is in the terminal stages of prostrate cancer and currently weighs only about 100 pounds, but his doctors OK'd his attending the ceremony. The native Kansan, who came to Hollywood at 18 years-old, told the crowd, "Everything I've learned, I've learned from Hollywood. This has been my home and my schooling." The actor wore a shirt decorated with scenes from Easy Rider (probably his most famous film).
Starting with his role as a teenage hoodlum in Rebel Without A Cause, Hopper has appeared in over 100 films. He has long been one of America's finest actors. He has played heroes and villains, and done both leading roles and character roles. Few actors will leave a legacy as rich as his.
Producer (and friend) Mark Canton spoke at the ceremony and said Hopper was "the coolest guy on the planet. . .He is a force of nature. He is a world-class original, a legend in his own right, whose impact on the arts and people that he loves so dearly is second to none."
Congratulations Dennis! It was a long time in coming, but you richly deserve the honor.
Posted by Ted McLaughlin at 12:04 AM