Hank Comes Back To The Panhandle 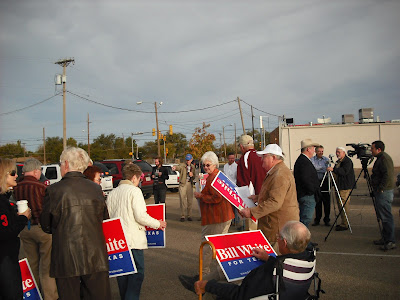 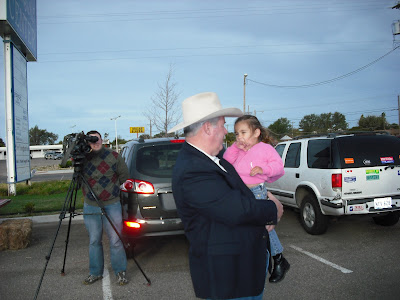 Hank Gilbert, Democratic candidate for Texas Agriculture Commissioner, brought his campaign back to Amarillo yesterday.   Gilbert is making one last swing through the Panhandle and West Texas in this final week of the 2010 election season.

West Texas and the Panhandle produce a huge portion of the state's cotton, wheat and beef cattle.   And the cities out here depend on that farm and ranch income, even the larger cities like Amarillo and Lubbock.   Hank Gilbert understands that, and having made his living in farming and ranching, he also understands the difficulties faced by this area's farmers and ranchers.

I can understand voters wishing to vote their party line in many of the other races on this year's ballot, but the race for Agriculture Commissioner is one where the voters in this area (and other agricultural areas of Texas) need to choose the candidate who understands the problems particular to agriculture.   Hank Gilbert is that candidate.

Gilbert understands that Texas has a budget deficit to deal with in the next biennium, and he has a plan to cut the waste and fat from the Department of Agriculture.   He says the department is top-heavy in Austin, and that is where much of the cutting must be done.   But he also understands there are areas that must not be cut, like the field investigators who are responsible for food safety and gas pump honesty in measurements.

No matter who you choose to vote for in other statewide races, I urge Panhandle and West Texas residents to give serious consideration to voting for Hank Gilbert for Agriculture Commissioner.

The Democratic nominee for District 87 State Representative, Abel Bosquez, was also at the rally trying to round up last-minute votes.   Bill White, Democratic candidate for governor, was scheduled to be at the rally, but cancelled at the last minute for a "very important press conference".   No surprise there.   He's never seemed to consider votes from the Panhandle very important.

In the pictures above:
TOP -- Hank talks with local media as the crowd gathers to hear him.
BOTTOM -- Hank chats with a future Democratic voter.
Posted by Ted McLaughlin at 12:06 AM