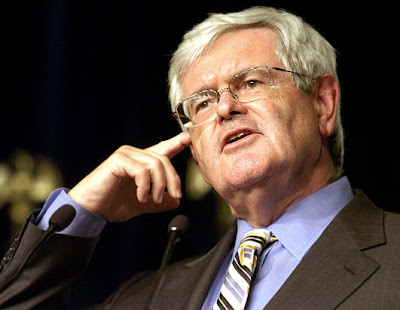 Newt Gingrich (pictured) announced his candidacy for the Republican presidential nomination a couple of days ago. And almost immediately he gave voters an excellent reason to make sure that he never gets into the White House. On Wednesday he told Fox News' Hannity, "I know how to get the whole country to resemble Texas." That one statement should be enough to scare the hell out of American voters.

It should scare voters because it shows that Gingrich, like most of his fellow Republican politicians, cares only for his corporate and Wall Street buddies and not the 90-95% of Americans who are still being hurt by the Republican recession. Texas may look like heaven to corporate bigwigs since it is a low-wage, anti-union, anti-corporate tax state, but it certainly doesn't look that way to ordinary citizens. Consider the following:

* Texas has a very regressive tax system, depending mainly on sales and property taxes. This means that the poor and the working class (and the middle class) pay a far larger share of their income in taxes than the rich do.

* Texas has the largest number of low-wage (and low-benefit) workers of any state in the nation.

* Texas has the largest percentage of its citizens without health insurance of any state -- about 30% of its population.

* Texas is among the worst "per pupil" funders of public education in the nation (and will be even worse after the education cuts being made in the current legislative session).

* Texas currently has one of the biggest budget deficits in the nation -- about $27 billion for the next biennium.

* Texas has the largest prison population in the nation (and executes more people than any other state).

* Texas is seventh in the nation in the percentage of its population living in poverty.

* Texas leads the nation in the percentage of high school drop-outs (about 30%).

* Texas is among the state leaders in teen pregnancy -- and is first in teen second pregnancies.

I could go on, but you surely get the picture by now. Texas is far from the conservative paradise that idiots like Newt Gingrich would like you to believe it is. I just have one question for American voters.

Do you really want America to be like Texas?
Posted by Ted McLaughlin at 12:04 AM