Cuts To Military Are Needed To Control The Deficit 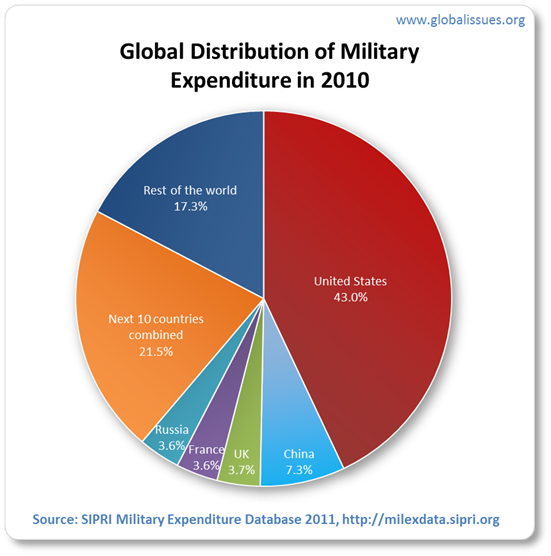 I was struck yesterday by a headline over at New York Times/MSNBC.com. It said "Lawmakers Aim To Stop Pentagon Cuts If Deficit Panel Fails". Frankly, this makes no sense at all. If the politicians are truly concerned about the deficit, as they claim to be (especially the Republicans), how could they fail to make cuts in the largest segment of discretionary spending in the entire government budget (military spending makes up about 54% of all discretionary government spending)? Here is part of that article:


As pessimism mounted this week over the ability of a bipartisan Congressional committee to agree on a deficit-reduction plan, lawmakers began taking steps to head off the large cuts in Pentagon spending that would automatically result from the panel’s failure.


Members of both parties and both chambers said they increasingly feared that the 12-member committee would be unable to bridge deep partisan divisions and find $1.2 trillion in deficit reduction as required under the law that raised the debt ceiling and created the committee in the summer.
As talks sputtered, one panel member publicly lamented that the process was not working, and the group was chastised by a bipartisan group of budget experts at a public hearing for failing to show progress. Several members of Congress, especially Republicans on the House and Senate Armed Services Committees, are readying legislation that would undo the automatic across-the-board cuts totaling nearly $500 billion for military programs, or exchange them for cuts in other areas of the federal budget.
These same politicians want Americans to believe that the spending on social programs that help poor people, unemployed people, children, and others is out of control and must be cut. And yet, all of these programs put together do not equal the money our government spends on the military. Spending for social programs is not out of control at all -- in fact more is needed to help Americans survive this recession (especially since Congress refuses to invest in job creation).

Second, why must the United States spend more than the next 15 biggest spenders to defend themselves? Or our needs and dangers so much greater than theirs? Of course not. The truth is that the only reason we spend so much is to support our military-industrial complex -- the greediest one in the world, that gobbles up tax dollars like candy. Most of our spending is not for defense, but to fill the bank accounts of greedy capitalists and corporations.

Our politicians are doing things exactly backwards. While the American people, due to the recession, have a need for the government to increase spending in social programs, the government is cutting those programs. And while there is no need for the U.S. to spend nearly as much as it does on the military, they refuse to cut that unnecessary spending, and in fact, actually increase military spending each year.

If the budget deficit needs to be brought under control, as the politicians tell us it does, then the cuts should come from the vastly out of control military budget. We could cut our military budget in half and still be spending far more than any other country in the world (and more than China, Russia, France, and the United Kingdom combined). That would be more than enough to insure our national defense -- and it would free up billions to help hurting Americans.

It's time to stop financing our leaders' ambitions to be the world's bully, and use our funds to help the people in this country. It would promote peace and make us a better and fairer country internally.
Posted by Ted McLaughlin at 12:06 AM