Theft Of Election Foiled By Anonymous ? 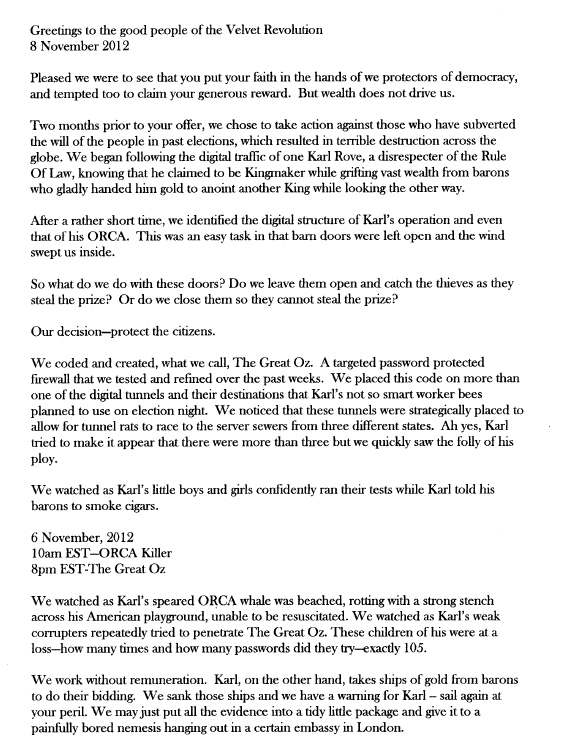 On October 27th, I posted about alleged election rigging that has possibly been going on for several elections (that would flip 10% of votes from one candidate to his opponent -- enough to swing a close election). Supposedly, this was even done in the Republican primary to help Romney win, and it was done only in very large counties with lots of votes (because the manipulation of votes would be less obvious in a large county).

Evidently some people believed this was happening, or at least could be happening -- the hacker group known as Anonymous. On November 1st, I wrote that Anonymous had published a public letter warning Karl Rove not to try and steal the election through any kind of digital manipulation. They told him they would be watching, and he would be caught if he tried anything nefarious.

Did Rove try to steal the election? Possibly. The letter above is purportedly from Anonymous (and was sent to the website Wonkette). We know the Republicans had a computer system called ORCA, which they claimed was to help them get out the vote (and which failed miserably on election day). The letter claims that ORCA had a dark side, which would allow it to tap into computers in at least three states to change votes -- and that Anonymous blocked the computer portals to those states by hacking in to the GOP computer system and erecting a firewall to prevent access on election day, insuring an honest election.

Did this really happen? Did Rove and his minions set up a system to steal votes, only to have it blocked by Anonymous? I honestly don't know (being barely computer literate myself). But I believe it is possible, and if it did happen, I hope they go ahead and release the information to the world. Here is an interesting take on the situation by Nathaniel Downes over at Addicting Info:

While some might consider this a random letter, or a jump to claim responsibility, if you step back and study the letter carefully a very clear message comes out.
They cite specific numbers. They state precisely how many tunnels are there. They cite how many passwords were attempted. But, there are key words which look innocent but, to a computer engineer, are very much a trigger.
These phrases are (our emphasis):

We noticed these tunnels were strategically placed to allow for tunnel rats to race to the sewer servers from three different states.

Now, to a normal person a rat is just that: a furry animal or a slang term for a scoundrel. But to a computer person, a rat is something radically different, a r.a.t. hack. The Remote Administration Tool hack is a method of remotely accessing a machine as if it were local. Using such a hack, you would have full access to the machine, at a level someone physically at the machine may not have. A “sewer server” is a term used to denote a hack over a secured tunnel, known as a Secured SHell (SSH), using a form of encryption designed to make it appear to be innocent background traffic.
This is not some general discussion, making claims in order to claim. They have released clear and specific details on what exactly was done, information which the people behind Orca can verify. Even more telling, however, is the name the group used for their denial of service attack:
The Great Oz
“Oz” refers to the land in the classic movie, The Wizard of Oz; more currently, it refers to the television show Oz,which is about a prison. And the actions the group took was to attempt to hack the election into jail, locking it away. It broke, absolutely. We reported on the failures of Orca and its public face earlier. What Anonymous is claiming is that Orca’s public face was a farce, a lie. It was not to coordinate poll challengers so much as to steal the election.
The little cherry on top, however, is the hint that Anonymous not only blocked the operation, but kept copies of the code and data from Orca and are planning on leaking it to wikilinks. If and when this happens, you know AI will be there.
Posted by Ted McLaughlin at 12:08 AM