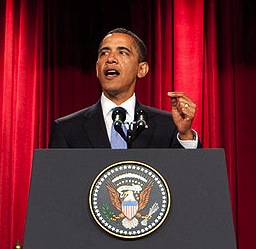 I supported (and voted for) Barack Obama in both the 2008 and 2012 elections -- and I still support his presidency. But that does not mean I agree with everything he has done. He has done (or failed to do) some things that I simply cannot agree with.

For instance, five years into his presidency we are still engaged in an unnecessary war in Afghanistan that cannot be won -- and he wants to continue that war for another year and a half (and maybe much longer).

And the prison at Guantanamo Bay is still open, and holding prisoners without either charges or the right to a trial. This is inexcusable, especially since more than a hundred of those prisoners have been declared by the government to be no threat to the United States. President Obama had promised to close this facility, but has not done so.

Then there is the Patriot Act -- that violates the rights of Americans by subjecting them to unreasonable searches without probable cause. Frankly, I see no difference between the Obama administration and the Bush administration on this issue. Both led Americans to believe it would only be used to snoop on foreign nationals linked to terrorist organizations, but that turned out to not be true. We now know it has been used to conduct massive spying on American citizens.

And now it seems the Obama administration is willing to disregard part of the First Amendment to the Constitution -- the part that guarantees all Americans the right to freedom of religion (which includes the right to be free from religion). The administration has submitted a brief to the Supreme Court supporting the idea that city governments should be able to open their meetings with a christian prayer.

For years, the town of Greece (near Rochester, New York) has opened it's council meetings with a christian prayer. Two citizens, one Jewish and the other an atheist, sued the town saying those prayers were "offensive and inappropriate". A federal appeals court sided with them, and ruled that the christian prayers violated the First Amendment ban on government "establishment of religion". This was the appropriate decision, since that government entity is supposed to represent all citizens, not just the christian citizens -- and its endosement of the christian religion did not adequately represent those with other religions or no religion at all.

Unfortunately, the Obama administration doesn't see anything wrong with government endorsing the christian religion. They don't see it as a violation of the First Amendment rights of citizens who are not christians. The administration's brief to the court says that the opening of council meetings with a christian prayer "does not amount to an unconstitutional establishment of religion merely because most prayer-givers are christian and many or most of their prayers contain sectarian references".

Would the Obama administration, and its right-wing fundamentalist allies in this matter, feel the same if that town council was offering mostly muslim or wiccan prayers? I doubt it. They would consider that to be a violation of freedom of religion. And if that is a violation, then so is the offering of christian prayers to start meetings. Anyone who disagrees with that is supporting the government endorsement of christianity -- and that is unconstitutional.

This stance by the Obama administration is very disappointing. It can only serve to make non-christians feel that they are not fairly and equally represented by their government.
Posted by Ted McLaughlin at 12:04 AM