Living In A "Campaign-Free Zone" ? 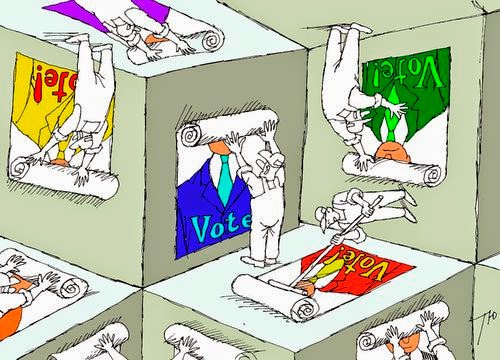 We're just a couple of months away from an important election -- an election that will determine which party controls Congress for the next couple of years (which will determine whether anything is accomplished or we continue to have a federal government that is dysfunctional and refuses to compromise on anything). And in many parts of this country the two political parties are fighting tooth-and-nail for every vote they can get.

People all over the country have been inundated with political ads (TV, radio, newspapers, yard signs, etc.). It is estimated that over $1 billion has already been spent on political advertising for the 2014 election -- and much more will be spent before election day. Some estimate the final total will be around $4 billion. At least $84 million has been spent on just three senate races ($36 million in Kentucky, $28 million in North Carolina, and $18 million in Iowa) -- and that doesn't count the other senate races or the 435 House races.

In other words, in many parts of the country, an election ad will be the first thing a person sees when they open their eyes in the morning, and the last thing they see before closing their eyes to go to sleep. You might notice I said "in many parts of the country". That's because here in Amarillo (the largest city in the Texas Panhandle), we seem to be living in a campaign-free zone. While others are already sick of seeing campaign ads, it is rare in this part of Texas to see one of those ads (even though Texas has both a senate and governor's race this year).

I don't think this is because there aren't as many votes up here as in other parts of Texas -- because in a close election the Panhandle votes could be the deciding factor. I suspect it is because this is a very red part of Texas -- perhaps the reddest. The Democratic candidates seem to have written the Panhandle off as being a lost cause -- and the Republican candidates see no reason to spend campaign money in an area the Democrats aren't contesting. Frankly, I think this is a mistake.

While most people elsewhere would like to see less campaign ads -- I would like to see more. While Republicans outnumber Democrats about 3 to 1 here, there are a lot of Independents (probably more than both parties put together). And those Independents are not going to vote for anyone who has not asked for their votes (something I believe is true of voters anywhere). A few of them might go to the polls (and vote like their neighbor), but I suspect most of them will just stay home (because they have not been given a reason to vote for anyone).

Democrats have been trying to establish a get-out-the-vote campaign up here -- but that just identifies those who are Democrats (or leaning that way) and trying to get them to the polls. That needed to be done, but that will not end the GOP dominance in the Panhandle. We must reach out to Independents, and give them a reason to go to the polls and vote Democratic -- and that won't happen until Democratic candidates spend some campaign money here to ask for those votes.

It may sound strange to those of you in other states (or other areas of Texas), but I would like to see a lot more campaign ads in the Panhandle -- because that would mean the parties are actually fighting for the votes up here.
Posted by Ted McLaughlin at 12:06 AM