Clinton Still Has A Lock On The 2016 Nomination 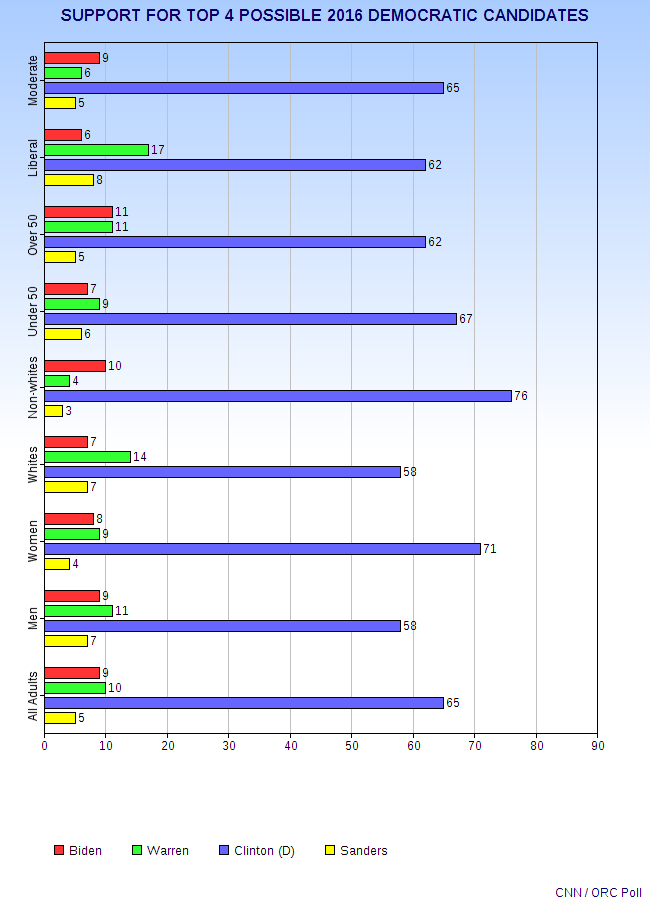 There are still some progressives that want someone to run against Hillary Clinton for the 2016 Democratic presidential nomination, and the possible candidates they mention are Senator Elizabeth Warren of Massachusetts or Senator Bernie Sanders of Vermont (who is an Independent, but could run as a Democrat). I understand this, because I am an admirer of both myself. But it's time to face reality.

If Hillary Clinton wants to run (and I believe she does), then the nomination is hers. The chart above makes that clear (as have numerous other polls over the last few months). This time its a CNN / ORC Poll -- taken between November 21st and 23rd of a random national sample of 1,045 adults. The Democrats and Independents leaning toward Democrats had a margin of error of up to 8.5 points.

But even that rather large margin of error is eclipsed by Clinton's lead over the other candidates. She has a 56 point lead over Joe Biden, a 55 point lead over Elizabeth Warren, and a 60 point lead over Bernie Sanders among all adults. And it doesn't get any better when you look at the individual groups. Clinton gets a majority support among all groups (men/women, young/old, white/non-white, liberals/moderates). And although I didn't include it on this chart, the same is true of rich/poor and college/no college groups.

We need to stop this fantasy of finding someone to run against Hillary Clinton in the primaries. They would have no chance of beating her, and the best they could do is cause an intra-party squabble that could hurt Democrats in the general election.

Is Hillary Clinton the perfect candidate? Far from it. But she is the Democratic Party's best chance to hang on to the White House in 2016 -- and that is very important. We must keep any of the Republican extremists out of the White House for the good of the country (and the economy). I also believe Hillary Clinton would have the longest coattails of any candidate -- giving Democrats the best chance of re-taking the Senate (and possibly even the House).

That same poll also queried Republicans and GOP-leaners, and the results are shown in the chart below. Romney has a small lead (but only 20%) and everyone else is clumped pretty closely together right behind him. I really can't see the teabaggers choosing Romney for a second time, and they do control the GOP right now. That's means the Republican race for the nomination is still wide open. 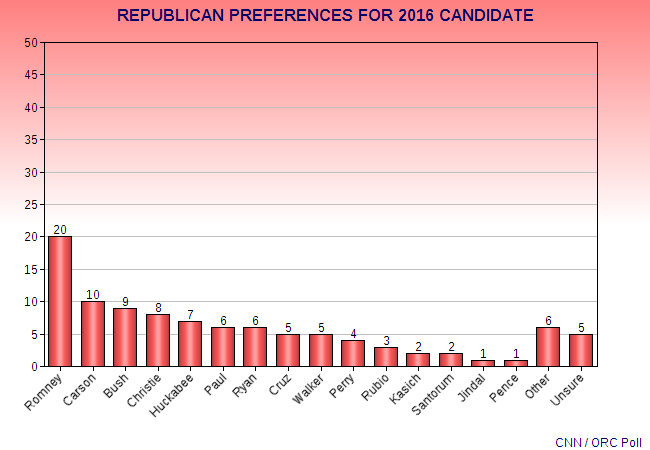