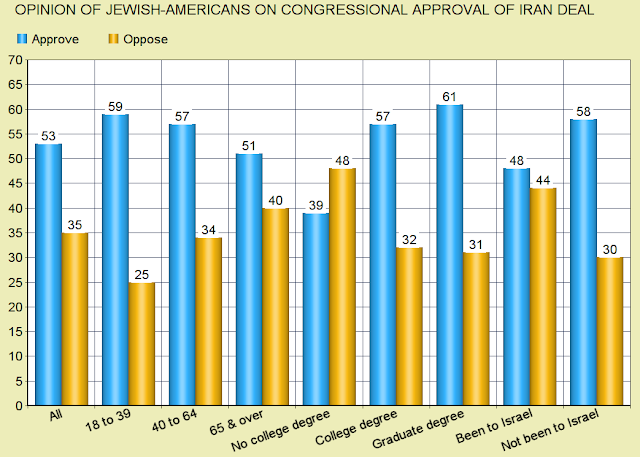 When the Iran Deal was announced, Israeli Prime Minister Netanyahu angrily declared that President Obama had just assured that Iran would get a nuclear weapon. And Republicans ("friends" of Israel supposedly) have been quick to join Netanyahu in denigrating the deal. One Republican, Mike Huckabee, even went so far as to say in agreeing to the deal the president had sent Jews to "the doors of the oven" (invoking an image of the WWII holocaust).

So, what do Jewish-Americans think about the Iran deal? Do they agree with Netanyahu, Huckabee, and other right-wingers? The Jewish Journal decided to find out. They surveyed 484 Jewish households about the Iran deal, and whether Congress should approve or oppose the deal. And what they found might surprise some people.

It turns out that 48% approve of the Iran deal, while only 28% oppose it (and the remaining 24% say they don't know enough about it to have an opinion). And a majority are willing to give the deal a chance to work. As the chart above shows, 53% say Congress should approve the deal -- and only 35% say Congress should oppose it.
Posted by Ted McLaughlin at 12:04 AM