Is Bernie Sanders Really A Democrat ? 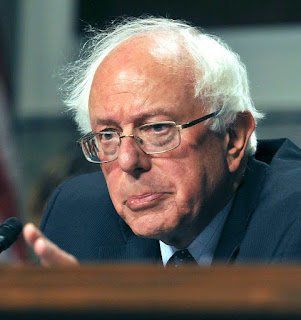 Bernie Sanders, the Independent socialist senator from Vermont, is running for president on the Democratic ticket. According to which poll you believe, he has the support of between 19% to 26% of Democrats -- but at least so far, he seems to be unable to up that percentage and really pose a threat to Hillary Clinton.

A lot of people have given different opinions for why they prefer Clinton over Sanders. One of the most popular is that they think Clinton has a better chance of beating the Republican candidate. But I think there may be another reason -- a reason that is important only to long-time party regulars (those who have been Democrats and worked for Democratic candidates most of their lives, including the times when being a Democrat was not the popular thing to be). A lot of these people are asking themselves -- is Bernie Sanders really a Democrat?

Sanders has caucused with the Democrats in Congress (because if he didn't caucus with one of the major parties, he couldn't get on any congressional committees). He also votes with Democrats most of the time (because he is a progressive, and the Democratic Party is the only party putting forth any progressive bills). He is running for president on the Democratic ticket (because it is much harder to run as an Independent nationwide). And he has promised to support the eventual Democratic nominee if he doesn't win (kudos to him for that). But is he really a Democrat?

He has been in Vermont politics since the mid-seventies -- about 40 years. And at no time during that 40 year period has he ever run as a Democrat. In fact, the Democratic Party in Vermont has chosen him as their candidate in the past, and he declined their nomination. He has made it very clear to the people of Vermont for a long time that he is NOT a Democrat. Has he changed his mind? Or is he just taking advantage of the fact that there are many progressives in the Democratic Party, and knowing no one can win as an Independent?

I still have to wonder what his answer would be if he was asked point-blank -- Are you now a Democrat, and are you proud to be a Democrat? I suspect if he was honest (and I believe he is), he would say no. And that bothers me. And I think it bothers a lot of other Democrats who have struggled to support Democratic candidates -- especially in the red states (where being a Democrat is toughest).

I know some progressives supporting Bernie will tell me it doesn't matter if he is a Democrat or not -- that it is more important that he support progressive ideas and values. But I think it does matter -- maybe not to all Democrats, but to a lot of them. Why should they work for and support someone who has always rejected our party, when they have a good progressive candidate (Hillary Clinton) who has always supported the party -- through good times and bad times? Isn't loyalty something that should be recognized and rewarded.

I don't think Bernie Sanders will be the Democratic Party nominee, but if he is, I will vote for him and work for him. I would feel a whole lot better about his candidacy though if I could hear him say just one time -- I am a proud Democrat.
Posted by Ted McLaughlin at 12:02 AM