Is The GOP Race Narrowing Down To Three Candidates ? 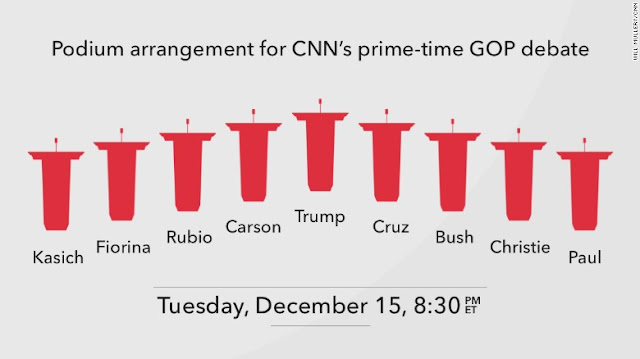 The picture above, from CNN News, shows the line-up for the next Republican presidential candidate debate. Note that the field has narrowed to only nine candidates. Who is left out (demoted to the "kiddie table")? It is Mike Huckabee.

This is no surprise. Huckabee may have been a player in previous primaries, but in this election season he is just an after-thought. Even his natural base, the evangelicals, have abandoned him for other candidates (Ted Cruz and Ben Carson). It would not surprise me if he dropped out soon -- maybe before the Iowa caucus.

That leaves nine candidates, but only four of them still have support in double digits. The other five (Bush, Fiorina, Kasich, Christie, Paul) are struggling to keep their campaigns alive -- and only a little more than a month from the begin of the caucuses/primaries, remained mired in si angle-digits. I think it is time to admit they are no longer serious candidates.

That leaves four candidates -- Donald Trump, Ted Cruz, Marco Rubio, and Ben Carson. I still don't think Ben Carson can get the nomination. The racists in the party are not going to support him, and most other Republicans are starting to figure out that he really doesn't have the knowledge (or thinking skills) to be a credible candidate. He has been fading fast in the last few weeks, and I believe he will soon join the five "also-rans".

That leaves Trump, Cruz, and Rubio -- and I believe the eventual nominee will be one of these three men. They each have a constituency that will keep them in the race for a while. Trump is the darling of the teabaggers. Cruz is doing a good job of cornering the evangelicals. And Rubio seems to be the only alternative left for the establishment Republicans.

I have said in the past that I believe Rubio will be the eventual GOP nominee, and I still believe that is likely to happen. But it is by no means a sure thing, and Trump or Cruz could easily win the nomination. It will come down to which of those three wings of the Republican Party has the most clout.
Posted by Ted McLaughlin at 12:06 AM