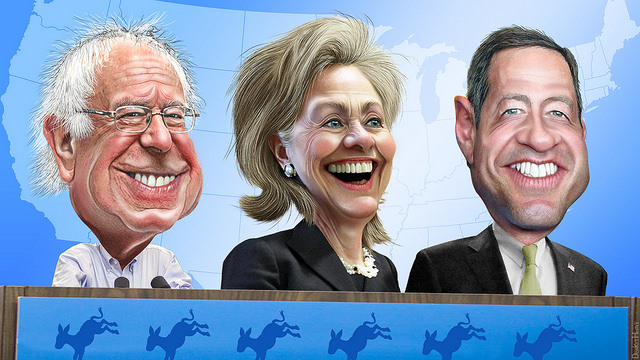 (This caricature of Democratic presidential candidates is by DonkeyHotey.)

I am a proud progressive and I am a staunch supporter of Hillary Clinton. And I also wholeheartedly agree with this proud progressive and Bernie Sanders supporter (Manny Schewitz of Forward Progressives). All Democrats (including progressives) should support, campaign for, and vote for the candidate of their choice -- but the threat to stay home or vote third party if a certain candidate doesn't win is ridiculous, and only helps the Republicans (which hurts our country and the progressive cause). It's childish behavior ("If I can't pitch, I'll take my ball and go home") in a time that demands adults stand and be counted.

I have been writing for Forward Progressives for almost three years now. In that time, one thing that has jumped out at me most is how many people are so bound by ideology to their pet cause or favorite candidate, that they are incapable of even considering or tolerating beliefs other than their own.
All over Facebook, Twitter and the rest of the Internet, I’ve seen both Bernie Sanders and Hillary Clinton supporters who blatantly refuse to vote for the opposite Democratic candidate, and promise to sit out the 2016 election if they don’t get exactly what they want. That’s not only politically immature, but it shows a lack of understanding about the issues America will face over the next decade. It also tosses the progress we’ve already made in several key areas completely by the wayside.

Let me be very clear on what I am about to say. It’s OK to be Ready for Hillary, and it’s OK to #FeelTheBern. I have zero animosity toward people who have decided to support Hillary Clinton, including some of my fellow liberals who like her. Even some of the left-libertarian Bernie Sanders conspiracy nuts aren’t so bad, just as long as you don’t try to talk to them about vaccinations or genetic technology.

Trust me, as a Bernie supporter, some of these people drive me to want to pour a second double glass of scotch in order to cope with their rants about technology or conspiracies by the media to marginalize Bernie. The same thing can be said for Hillary Clinton supporters who want to discount Bernie Sanders on his pragmatic approach to gun control.

I can even understand the beliefs of uninformed voters who plan on voting for Donald Trump or Ted Cruz, bless their hearts. Their political ideology is strange, often paranoid and hypocritical, or even sometimes blatantly racist. Their ideas are obviously the product of years of being stuck in the Fox News bubble, but I still understand that they would probably vote for David Duke or Cliven Bundy if given the chance.

What is infuriating is that while Bernie and Hillary represent different factions of the left, they’re both vying to be the nominee to run against the GOP nominee who could very well be Donald Trump or Ted Cruz, or even Marco Rubio.

The Republican Party is splintered badly right now, and the establishment is frantic over the possibility that Cruz or Trump could be their nominee. On the other side, Democrats have three candidates who are all far better choices than anything the GOP has to offer. As a very passionate Bernie Sanders supporter, I would gladly support Hillary Clinton or even Martin O’Malley – should they be the nominee instead – because there’s just too much at stake to throw away all the progress we’ve worked toward.

This is not the time for liberals to be fighting with each other over ideological purity, and anyone who says that they won’t vote if Bernie or Hillary isn’t the nominee is forfeiting our future to the Republican Party. Let’s do what we need to do in the primaries for the candidate we support, then worry about stopping the Republican path of destruction come November. We absolutely must be on the same page to move this country forward.
Posted by Ted McLaughlin at 12:02 AM