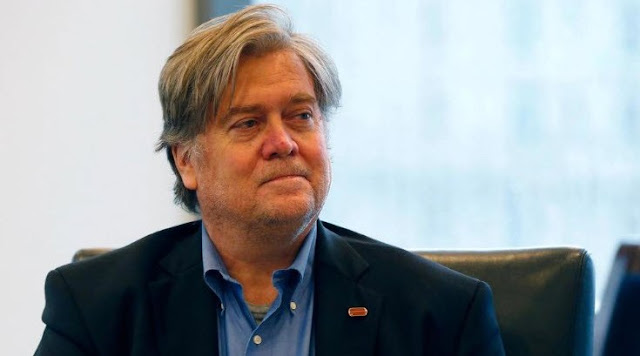 (This photo and information in the post below came from mindy-fischer-writer.com.)

One of Donald Trump's first picks for his new administration was to choose Steve Bannon as his chief White House advisor (one of the two most powerful position in the administration -- along with Chief of Staff).

The pick has received a lot of criticism, even from Republicans -- because Bannon was formerly the head of Breitbart News (an ultra-right-wing website that promoted racist and white supremacist ideas). He has also been quoted as making disparaging remarks about minorities, muslims, and women. As bad as that is, and it is very bad, he may actually have done worse. He may have shown himself to be a criminal by breaking campaign laws (felonies).


“The Democratic Coalition Against Trump reported Steve Bannon to the FBI on Tuesday morning after learning that he likely broke campaign finance laws during his time as CEO for the Trump campaign. According to FEC records, $950,090 was paid to Bannon’s company, Glittering Steel LLC, over the course of the campaign by pro-Trump super PAC, Make America Number 1. The super PAC is mainly backed by Robert and Rebekah Mercer, and Rebekah was recently named to Trump’s transition team. The most recent payment made to Glittering Steel LLC was on November 5, 2016, and a full list of the expenditures made by the PAC to Bannon’s company can be found here. Before Bannon became Trump campaign CEO in August of this year, Glittering Steel LLC was reported to the FEC at Breitbart’s address in Beverly Hills, CA. Right after Bannon became CEO, however, Glittering Steel LLC was exclusively reported to the FEC at an address in Arlington, VA.
It is against campaign finance law for super PACs to directly coordinate with the campaigns they support, so Bannon’s role as both an employee of the super PAC and campaign CEO would have broken the law. Additionally, there is a 120-day “cooling off” period for employees once they leave a super PAC to join a campaign to help avoid coordination, which Bannon would have violated when he became Trump’s campaign CEO just 9 days after being paid by Make America Number 1. The FBI’s public corruption unit has jurisdiction to investigate campaign finance crimes, and in 2015 a campaign worker was sentenced to 2 years in prison for his role in illegal coordination between a campaign and a Super PAC.”
Posted by Ted McLaughlin at 12:04 AM