NO! Bernie Sanders Would Not Have Beaten Donald Trump 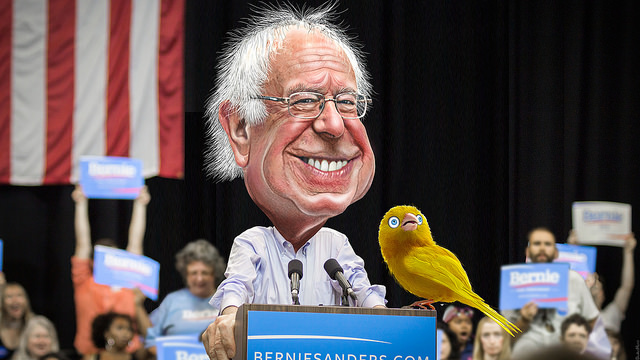 Kurt Eichenwald has written an excellent article for Newsweek on myths that some liberal Democrats believe. I have reposted here the part of that article dealing with whether Sanders could have won.


It is impossible to say what would have happened under a fictional scenario, but Sanders supporters often dangle polls from early summer showing he would have performed better than Clinton against Trump. They ignored the fact that Sanders had not yet faced a real campaign against him. Clinton was in the delicate position of dealing with a large portion of voters who treated Sanders more like the Messiah than just another candidate. She was playing the long game—attacking Sanders strongly enough to win, but gently enough to avoid alienating his supporters. Given her overwhelming support from communities of color—for example, about 70 percent of African-American voters cast their ballot for her—Clinton had a firewall that would be difficult for Sanders to breach.
When Sanders promoted free college tuition—a primary part of his platform that attracted young people—that didn’t mean much for almost half of all Democrats, who don’t attend—or even plan to attend—plan to attend a secondary school. In fact, Sanders was basically telling the working poor and middle class who never planned to go beyond high school that college students—the people with even greater opportunities in life—were at the top of his priority list.
So what would have happened when Sanders hit a real opponent, someone who did not care about alienating the young college voters in his base? I have seen the opposition book assembled by Republicans for Sanders, and it was brutal. The Republicans would have torn him apart. And while Sanders supporters might delude themselves into believing that they could have defended him against all of this, there is a name for politicians who play defense all the time: losers.
Here are a few tastes of what was in store for Sanders, straight out of the Republican playbook: He thinks rape is A-OK. In 1972, when he was 31, Sanders wrote a fictitious essay in which he described a woman enjoying being raped by three men. Yes, there is an explanation for it—a long, complicated one, just like the one that would make clear why the Clinton emails story was nonsense. And we all know how well that worked out.
Then there’s the fact that Sanders was on unemployment until his mid-30s, and that he stole electricity from a neighbor after failing to pay his bills, and that he co-sponsored a bill to ship Vermont’s nuclear waste to a poor Hispanic community in Texas, where it could be dumped. You can just see the words “environmental racist” on Republican billboards. And if you can’t, I already did. They were in the Republican opposition research book as a proposal on how to frame the nuclear waste issue.
Also on the list: Sanders violated campaign finance laws, criticized Clinton for supporting the 1994 crime bill that he voted for, and he voted against the Amber Alert system. His pitch for universal health care would have been used against him too, since it was tried in his home state of Vermont and collapsed due to excessive costs. Worst of all, the Republicans also had video of Sanders at a 1985 rally thrown by the leftist Sandinista government in Nicaragua where half a million people chanted, “Here, there, everywhere/the Yankee will die,’’ while President Daniel Ortega condemned “state terrorism” by America. Sanders said, on camera, supporting the Sandinistas was “patriotic.”
The Republicans had at least four other damning Sanders videos (I don’t know what they showed), and the opposition research folder was almost 2-feet thick. (The section calling him a communist with connections to Castro alone would have cost him Florida.) In other words, the belief that Sanders would have walked into the White House based on polls taken before anyone really attacked him is a delusion built on a scaffolding of political ignorance.
Could Sanders still have won? Well, Trump won, so anything is possible. But Sanders supporters puffing up their chests as they arrogantly declare Trump would have definitely lost against their candidate deserve to be ignored.
Posted by Ted McLaughlin at 12:02 AM