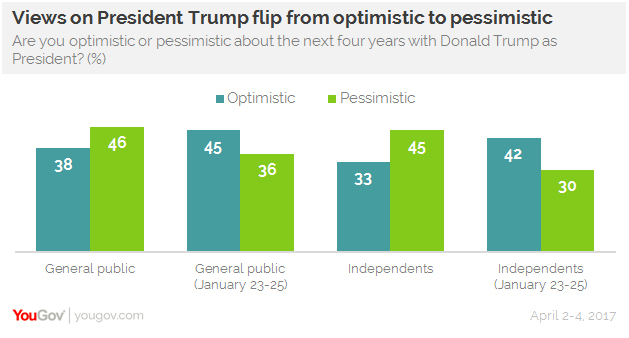 But more important were the views of the general public and of Independents -- because they will determine what happens in the next election.

Right after Trump was sworn in, both the general public (45% to 36%) and Independents (42% to 30%) were cautiously optimistic. I think they were hoping that Trump would put aside his bombastic campaign rhetoric and try to do what is good for the country as a whole.

If Trump doesn't right this ship (and so far, he shows no inclination to do so), then 2018 could be a disaster for the Republicans.

The chart above is from a new Economist / YouGov Poll -- done between April 2nd and 4th of a random national sample of 1,500 adults (including 1,331 registered voters), with a 3.2 point margin of error.
Posted by Ted McLaughlin at 12:04 AM