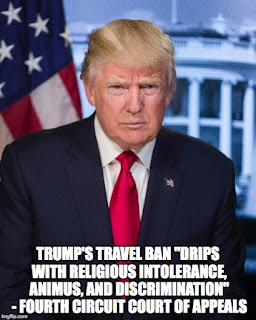 Donald Trump has lost another round in the courts over his executive order banning muslims from certain countries from entering the United States.

The Trump administration appealed the rulings of those courts to the Fourth Circuit Court of Appeals -- asking that appeals court to overturn the lower court rulings and allow the ban to be instituted.

On Thursday, the Fourth Circuit Court of Appeals issued its ruling (a 205 page ruling which you can read here). They refused to unblock Trump's ban on travel to this country by a vote of 10 to 3.

And they were unequivocal in their distaste for Trump's attempt to subvert the First Amendment's guarantee of religious freedom, saying the travel ban "drips with religious intolerance, animus, and discrimination".

It should be no surprise that Trump's bigoted toady in the Attorney General's office didn't like the ruling of the appeals court. Sessions, who has shown in the past that he thinks discrimination against groups is just fine, now extends that feeling toward religious groups. He says he will appeal the ruling to the United States Supreme Court.

What will the Supreme Court do? Will they uphold the First Amendment of the Constitution and rule that the Trump administration cannot discriminate against any religious group, or will they trash the First Amendment and decide that religious freedom is no longer protected? Sadly, with the current court, it could go either way.
Posted by Ted McLaughlin at 12:06 AM