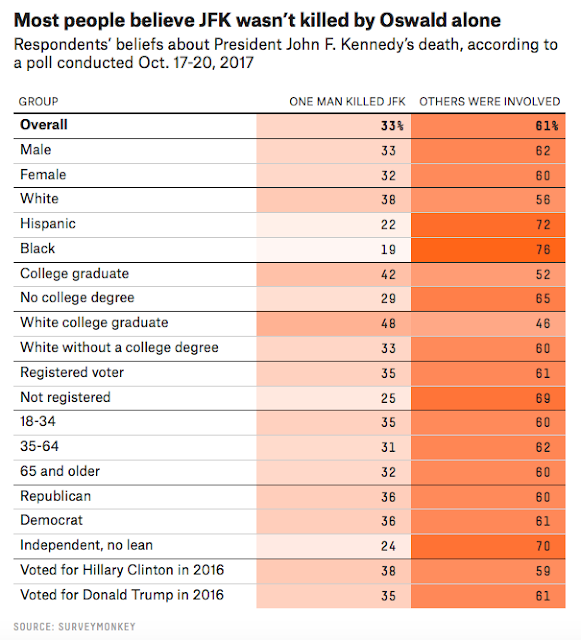 The chart above (from fivethirtyeight.com) shows the results of a recent SurveyMonkey Poll. That poll showed that more than six out of 10 Americans (61%) don't believe that Lee Harvey Oswald acted alone when he killed President John F. Kennedy. They believe there was some kind of conspiracy involved (although they'll disagree about who was involved in that conspiracy).

There are a couple of reasons why those conspiracies have abounded since 1963. One was the almost immediate killing of Lee Harvey Oswald by another lone nut (nightclub owner Jack Ruby). But perhaps the biggest reason was the U.S. government keeping many materials secret for five decades. This made people believe the government had something to hide (i.e., evidence of a conspiracy).

Fortunately, the documents are being released now -- at least most of them. They ALL should be released, because there is no legitimate reason to keep them secret after over 50 years. In fact, they should never have been made secret in the first place. Our government keeps too many things secret, and these documents are a good example of something that should never have been secret in the first place.

Even if all of the documents are released (as they should be), I believe the conspiracy theorists are going to be disappointed. There is no actual evidence of any kind of conspiracy. Lee Harvey Oswald was a nut who acted alone in killing President Kennedy. And the Warren Commission got it right.

That won't be the end of the conspiracy theories though. Those who refuse to believe the truth will take some of these documents, and take them out of context to support their own ideas -- just like they've done with the public evidence.

P.S. -- Please don't give me ridiculous comments about a "pristine" bullet that magically changed directions, or that Oswald wasn't capable of making the shot, or that the rifle he used couldn't have been shot three times in the time frame. All of those claims have been debunked. Believe your favorite conspiracy if you want, but don't try to further it with lies.

Also, Chief Justice of the Supreme Court Earl Warren was in charge of the government investigation into the assassination. Although a Republican politically, he showed great courage and honesty in guiding the court's decision in Brown vs Board of Education. I can't believe he would intentionally perpetrate a lie on the public.
Posted by Ted McLaughlin at 12:04 AM