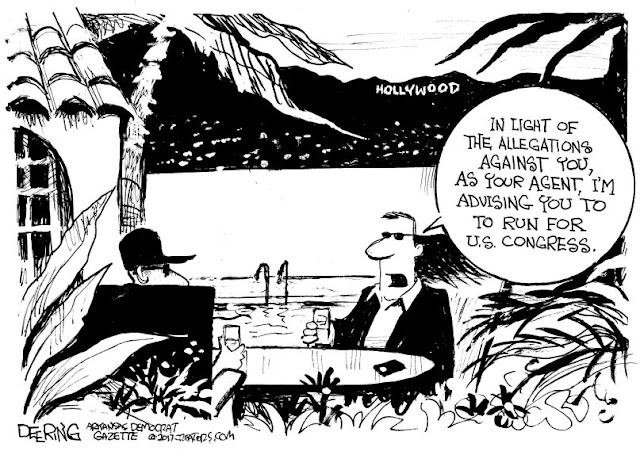 (Cartoon image is by John Deering in the Arkansas Democrat-Gazette.)

Since 1997, the government has paid out at least $17 million in workplace claims against members of Congress -- much of it for sexual harassment/abuse claims. That's $850,000 a year for the last 20 years, and the people footing the bill for that are the American taxpayers. That's right -- when a congressman discriminates against an employee, or abuses that employee sexually, they don't have to pay their victim. They pass the cost on to taxpayers.

And making matters worse, the offending members of Congress are not revealed. Before receiving any settlement, a victim must sign a nondisclosure agreement, and congressional rules prevent the offenders names from being made public. As a taxpayer, you don't even get to know whose crimes and unethical behavior you are funding.

Is this OK with you. It's not OK with me. I believe Americans deserve to know what their taxes are being spent on. And they, especially the voters, deserve to know which members of Congress are violating ethical or criminal rules. Anytime a payment is negotiated and agreed to, it should become public information -- and the name of the member of Congress that caused it should be made public (along with the charges resulting in the settlement).

Readers will know that I am a die-hard Democrat, but this is an issue that transcends party labels. Any member of Congress that discriminates against, to sexually harasses or abuses an employee should be named publicly -- and that is true whether they are a Republican or Democrat.

We expect people in other professions to adhere to a high standard of conduct. Why should we expect any less from members of Congress? I think a case could be easily made that they should be held to a higher standard.
Posted by Ted McLaughlin at 12:04 AM