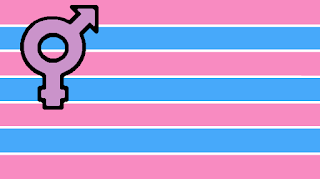 (The Transgender Pride Flag at left was designed by Johnathan Andrew.)

Donald Trump tried to appease his evangelical supporters by banning transgendered individuals from serving this nation in the military. It was pure discrimination.


For the first time, the Pentagon has outlined specific details about how transgender individuals will be processed into the military, allowing them to join according to their "preferred" gender, rather than their sex at birth.
A Department of Defense memo dated December 8, 2017, explains that if an applicant's preferred gender is different than their birth sex, they may present a birth certificate, court order or passport indicating their preferred sex and will be processed into the military under that gender.
Room assignments, height and weight standards, medical exams, underwear requirements, and bathroom assignments will be determined based on the "preferred" gender, even when the individual retains "the anatomical characteristics of their birth sex," the memo says.
The memo details in great specificity how transgender individuals will operate in the military, including directing that transgender male applicants who have not undergone hormone therapy or surgical changes will wear undergarments "consistent with their physical anatomy" and will be administered pregnancy tests like female applicants undergoing in-processing.
Both male and female applicants who have undergone sex reassignment surgery or genital reconstruction will be disqualified from joining the military unless they have been physically and emotionally stable for at least 18 months.
Applicants may request privacy during the group screening procedures and have chaperones based on preferred gender, not birth sex. In fact, once processed, the only record of a discrepancy between birth sex and preferred gender is a medical history form, DD 2807, maintaining an applicant's privacy.
"Every applicant will be treated with dignity and respect," the memo says.
Individuals who do not identify as either sex will be designated by their birth gender.
"We are substantially satisfied," said Shannon Minter, legal director of the National Center for Lesbian Rights. "Our whole goal here is not to have some unique rules...We just want transgender people to be treated exactly the same as everyone else."
Posted by Ted McLaughlin at 12:02 AM