For GOP Officials, Greed Is More Important Than Honesty 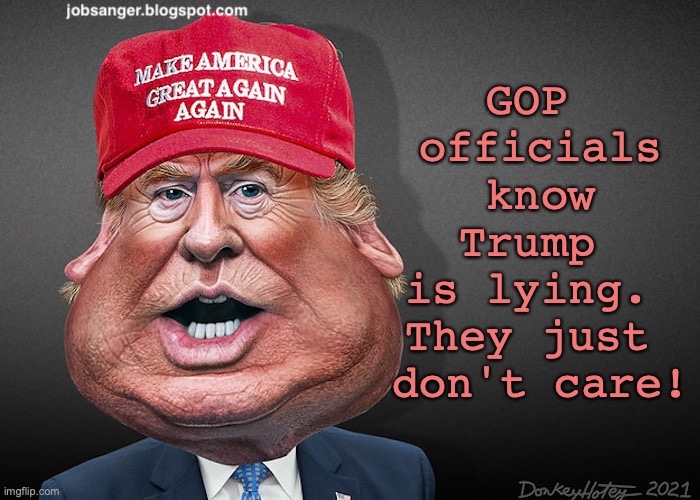 Some may be asking, how can Republican officials believe the lies Donald Trump is telling -- especially the "Big Lie" that he would have won the election except for massive voter fraud. The answer: they don't believe him. They know he lost the election and there was no massive (or even minimal) voter fraud. But they are raising too much money using Trump's name to admit they know the truth. In other words, their greed is more important than their honesty!

The following is from Hayes Brown at MSNBC.com:

If you're reading this, odds are you've known for a long time that former President Donald Trump's claims of a vast election fraud conspiracy are total fabrications. As is becoming clearer as the months pass, leading Republican Party figures have known the same for just as long.

They have either kept quiet about their concerns or been excommunicated from their roles. Instead, the loudest voices in the GOP are the ones who are actively promoting Trump's lies. But even those who are remaining quiet are content to use those lies to further their own agendas.

The Washington Post reported Tuesday that one of those GOP leaders, Justin Riemer, was trying to get his colleagues to see senseback in November. Riemer, the Republican National Committee's chief counsel, wrote in an email to a staffer that the RNC shouldn't post Trump's claims about ballot fraud on its social media accounts. And he didn't mince words:

“What Rudy and Jenna are doing is a joke and they are getting laughed out of court,” Riemer, a longtime Republican lawyer, wrote to Liz Harrington, a former party spokeswoman, on Nov. 28, referring to Trump attorneys Rudolph W. Giuliani and Jenna Ellis. “They are misleading millions of people who have wishful thinking that the president is going to somehow win this thing."

Giuliani reportedly tried — and failed — to get Riemer fired after he learned about that email. But if you look at the RNC's position since then, you can see two things are true. First, that the committee on the whole followed Riemer's advice and hasn't on the whole claimed that the election was stolen from Trump. And Chairwoman Ronna McDaniel never signed off on the wildest lies Trump put out there and has conceded that President Joe Biden won.

Second, the RNC has apparently decided that lying through omission isn't a sin. Because while the party's apparatchiks aren't touting the big lie directly, they are still backing Trump and using him to strengthen their fundraising efforts. Politico reported in May that the RNC had "sent 97 emails mentioning Trump" to its mailing list since Jan. 6. And it isn't condemning candidates who blast out conspiracy theories or refusing to offer them funding and campaign infrastructure.

You can also see it in when the committee chooses to speak out. When Republicans like Rep. Liz Cheney of Wyoming try to tell the truth, the RNC isn't sticking its neck out to back them up. But the committee is more than happy to spend time, money and effort to defend laws that hinder voting, like the one Georgia has passed — laws that have Trump's lies to thank for their popularity among the GOP base and their swift adoption.

Because let's be clear: Riemer disagreed with Giuliani and Ellis only because they went too far. As The Post reported, he was concerned that their antics were damaging a broader GOP campaign to promote "election integrity" as an issue. Ahead of the election, the RNC was more than happy to join the Trump campaign's efforts to block mail-in voting during a pandemic because it would help Democrats vote.

Those "millions of people who have wishful thinking" whom Riemer warned about are still being misled, even if it's not the RNC saying that Trump should be the real president. They're just fans of the people who are.